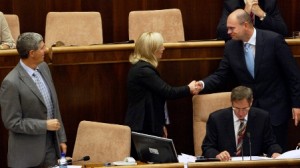 The SaS has expelled Igor Matovic from its parliamentary caucus, making him the third independent MP in parliament. The news, announced by party leader Richard Sulik, comes in reaction to Matovic blocking the revision to the Citizenship Act, which the government wanted to push through today.

Matovic is confused, though, because he says he voted exactly how he had agreed with the Coalition Council on Wednesday, and that they must have planned it in advance. He referred to SaS party leader and house chairman Richard Sulik as a hypocrite for the decision.

Radoslav Prochadzka from the KDH party also voted for the Smer-SD proposal, but he wasn’t thrown out, to which Matovic pointed to the greater freedom in KDH compared to SaS.

The fact that the government’s revision was withdrawn has also raised the hackles of Bela Bugar, whose Most-Hid party is now refusing to vote on any laws until the situation within the coalition is cleared up, effectively blocking parliament. He says it is a problem for the whole coalition, as it is about the approaches of individual MPs within.

The coalition has had a bumpy road since it took up power and now it seems that it will also be  a long and winding one.