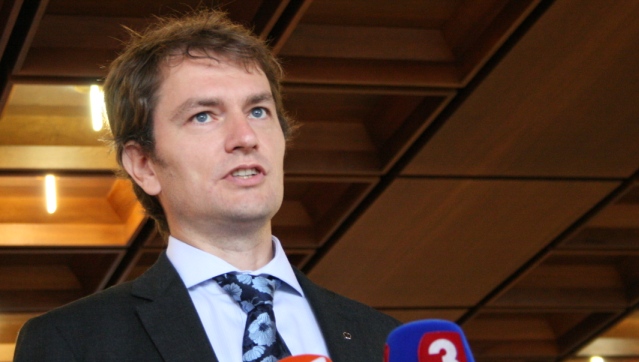 The potential new leader of the fragmented right-wing in Slovakia, Radoslav Prochdzka, looks set to lose his popularity after a recording was released apparently involving him asking to pay for his presidential campaign advertising without a receipt, saving money and avoiding taxes and VAT.

The recording, which has been much talked about for the past month or so, contains a conversation with head of the OLaNO party, Igor Matovic, who made the recording but says he didn’t disclose it, but who challenged Prochadzka  to come clean or at least take a lie detector test, which he refused to do.

Matovic obviously knew Prochadzka was going to propose a deal off the books, if the recording is real, and so queried him specifically about how much he wanted on the invoice and how much  cash in hand, and also about how much in total he spent on his campaign for the presidency.

Prochadzka’s reaction to the disclosed recording was to deny it, saying it had been cleverly edited to produce the incriminating conversation, where the voice alleged to be his also talks about having spent almost twice as much on his presidential campaign as what he reported to the Ministry of Finance.

Prochadzka’s response is similar to other cases from the past, like in the alleged recording of PM Robert Fico on parallel financing of his Smer-SD party or the one with Supreme Court Chairman Stefan Harbin talking to Albanian drugs baron Sadaki. They also adamantly rejected the claims and the recordings, which were not admissible, in an atmosphere where it is a case of proof not truth.

Prochadzka’s anticipated demise, after having only recently set up his new party Siet, will now throw the political arena wide open again just two years from the parliamentary elections, and with such a splintered grouping of right-wing parties, PM Robert Fico’s Smer-SD party looks to benefit most, once again. Prochadzka’s campaign finances will be investigated by the General Prosecutor.