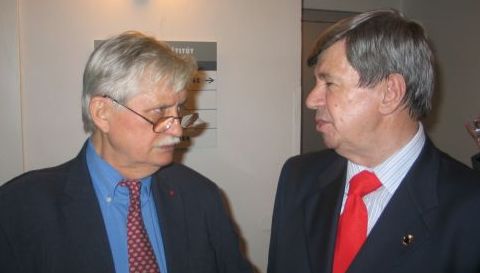 Today’s economic crisis acts as a catalyst for the “acceleration of history”, a phenomenon similar to the times after the collapse of the Berlin Wall in 1989, which brought something which was not expected – the split of Czechoslovakia – former Slovak foreign minister and current MEP Eduard Kukan told EurActiv.

Czechoslovakia split without a referendum in 1993 and Czechs and Slovaks have been remarkably relaxed about deciding to live separately.

Comparing the situation in his country at that time with separatist movements in present days, Kukan insists that there is “much more animosity” today in places such as Catalonia versus the rest of Spain.

“Czechoslovakia is not a typical case because if we look back at history, there were no big problems between the two nations. Once each of them is on the same ground, on the same basis, once they have been masters in their own house, there is no reason for them looking at the development of the two nations historically to cultivate negative feelings about the other,” he said.

However, Kukan recognises that Slovakia has been worried by the “wrong behaviour of the Hungarian national minority in Slovakia,” which has contributed to Bratislava’s decision to not recognise the independence of Kosovo.

But he insisted that the fear of the Kosovo precedent was not the main reason for the fact that Slovakia, together with Spain, Greece, Cyprus and Romania, are the only EU countries that do not recognise the independence of the former Serbian province.

“The most important factor why not to recognise Kosovo was that we thought that it was possible to reach a solution that would be acceptable to both parties. We thought that with the efforts of the international community, if there was a heavyweight negotiator, that it was possible to resolve those 5% of the issues, because they were telling at the time that 95% of the issues were already resolved,” he said.

“So the most important reason is that we are against the solution which was forced on one of the participants in the negotiations.”

The Slovak politician also argued that one could not compare the division of Czechoslovakia with regional separatism.

“Separatism cannot lead to creation of state. The right to self-determination can, but not separatism. And I don’t think that the Hungarian national minority living in Slovakia is wishing to secede or to join Hungary. I simply do not believe it. Sometimes their positions are ambivalent, and that’s why many politicians are suspicious about them,” he said.

Asked if Bosnia and Herzegovina, a laggard amongst the Western Balkans hopefuls for EU accession, could survive as a single entity with the ethnic Serb, Croat and Bosniak communities divided over a common future, Kukan gave a pessimistic reply.

“Bosnia and Herzegovina, given the construction of this state, is a very difficult country to govern. The question, whether it can survive, or can it have a viable development, is very, very pertinent. There are not many optimistic signs coming from the country that this would be possible,” he said.