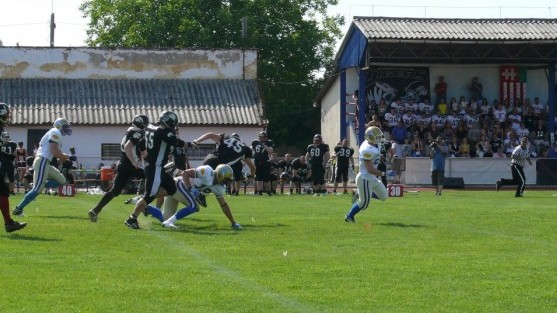 The Bratislava Monarchs (1-1) will take their show on the road this weekend to face the Gyor Sharks (1-1) in a Central European Interleague showdown. The Monarchs are looking to regroup after a sloppy loss against the Nyiregyhaza Tigers 2 weeks ago. In a game that was close for 3 quarters, the Monarchs watched as the wheels fell off and victory slipped away to yield a 30-14 defeat.  In the game prior to that the Monarchs scored their first victory of the season against the Klek Knights. A nail-bitter it wasn’t however as the victory came in the form of a forfeit. On that note, the Monarchs would like to apologize to all those that showed up to the stadium on that Saturday expecting to see a game. It was a last minute decision on the Knights’ part due to travel issues. Fast forward to this Saturday, the stage is set in Gyor as the Monarchs will try to establish themselves in their new league with their first proper victory.

The Sharks, founded in 2004, have enjoyed success in the Hungarian League winning the championship in 2006 and 2007. They also participate in the EFAF Challenge Cup, which is the 3rd highest level of club competition in Europe. With such a short schedule (4 games) losing another game would virtually take the monarchs out of the playoff picture. By “playoff” I mean the CEI Bowl on July 7th, there’s no tourney. Both the Monarchs and the Sharks have beaten the Knights, though the Sharks actually played them, and both teams have lost to the Tigers. Kick-off is at 3:00PM Saturday May 26th at DAC Palya Field in Gyor, Hungary. Exact address: 9024 Gyor, Papai Ut. 39.