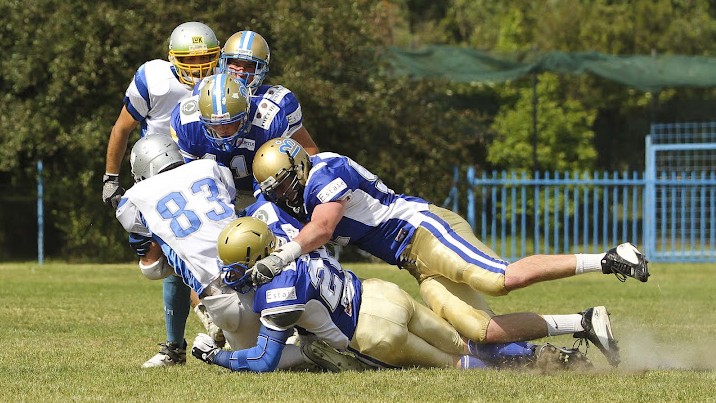 In a game that came down to the final drive, it was the Monarchs’ defense that shined in a 14-10 victory on the road versus the Gyor Sharks.

The Monarchs gave a sigh of relief when a 4th down deep pass to a wide open Gyor receiver fell incomplete with a little over a minute left in the game to end the Sharks’ rally and preserve the victory.  Despite having talented individual athletes, the offense has yet to find a winning formula to execute an efficient passing and rushing game. Neither offense ever got anything going in the first half but the Monarchs opened the scoring thanks to Patrik Subally (11) recovering his own spectacular blocked punt in the Sharks’ end zone for a Monarchs touchdown to make the score 7-0 following a successful PAT. That was all of the scoring in the first half. The final Monarchs’ drive of the half summed up the offensive frustrations as QB Tony Karpat (10 for 24, 112 yds, 1 TD and 2 INTs on the day) led the 2-minute drill by completing five out of six passes for 54 yards only to see the next three pass attempts fall incomplete and the 4th down pass go for a loss. The Monarchs once again came up empty handed, but had the lead going into the second half.

The Sharks finally got to the Monarchs’ defense in the second half scoring on a rushing touchdown and a field goal on their 2nd and 3rd possessions to take a 7-10 lead. With the Monarchs back on their heels, the offense immediately answered as Karpat led a 10 play, 69 yard drive capped by a 24 yard touchdown pass to Patrik “Primetime[1]” Slušný (19). The extra point was good to make the score 14-10 in favor of the Monarchs. That would be the end of the offensive displays however as the Monarchs’ defense was forced to flex their muscles to keep the Sharks from scoring again. The only time the Sharks would threaten was on their final offensive play of the game, but the Monarchs survived the scare despite turning the ball over 4 times compared to forcing no turnovers. The Monarchs defense took a hit however as starting defensive back Peter Rosinsky (31) suffered a broken arm late in the game. Rosinsky is arguably one of the best DBs that plays in the Monarchs’ leagues and the defense now finds itself with a hole to fill against the Budapest Cowboys on Saturday June 9th. The Cowboys will travel to Bratislava for the season finale and it is a must win for the Monarchs if they are to play in the CEI Bowl.

[1] Patrik named himself Patrik “Primetime” Polite. Slušný means polite in English so fair enough, but if it is acceptable to give yourself badass nicknames in Slovakia then I declare myself to be Patrick “the Impaler” McDaniel.