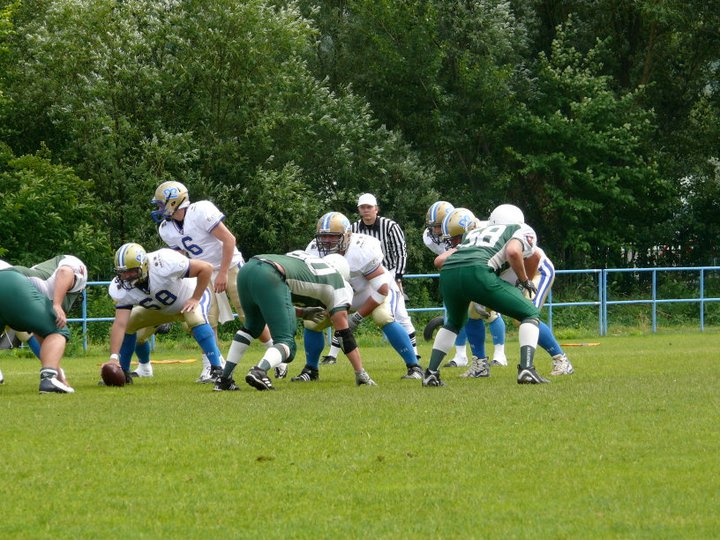 After defeating the Brno Alligators on the road on Saturday, the Bratislava Monarchs have set a date with the Prague Black Hawks in the first round of the play-offs. As only 4 teams make the playoffs and the Monarchs have the #3 seed, they will travel to Prague and play on Saturday July 9th. The Black Hawks lost in the regular season finale against the Prague Panthers on Sunday. The Prague Panthers will play the #4 seeded Ostrava Steelers on Sunday July 10th in Prague.

After a deflating defeat in May against the reigning champs, the Prague Panthers, the Monarchs regrouped and won 2 of their last 3 games to finish the regular season with a 5-2 record. These last 3 games included a blowout win against the Prague Lions (51-0). This was a game where quarterback Parker Siemens threw for three touchdown passes in the first quarter alone, including a 52 yard touchdown pass to fellow Canadian Matt Parker on the first offensive play. Siemens also found receiver Martin Katuninec twice in the end zone for two more touchdowns. Cornerback Peter Rosinsky also had two interceptions for touchdowns. After the rout of the Lions, the Monarchs’ offense ran flat the following week against the Czech League’s other powerhouse the Prague Black Hawks. The Monarchs were held scoreless for the first time this season in a 0-25 loss. This was the pivotal game that decided whether the Monarchs would have home field advantage in the playoffs or not. The Monarchs failed to capitalize on the opportunity.

In the most recent game held this last Saturday, the Monarchs traveled to Brno and defeated the Brno Alligators by a score of 27-0. Receiver Martin Katuninec caught 2 touchdown passes and leads the team with 8 on the year. Receiver Matt Walker also had a touchdown catch of 21 yards. Linebacker Brano Balada also contributed by returning an interception 40 yards for his first touchdown of the season.

With the Czech Championship on the line, the Monarchs hope to regain their swagger against the Black Hawks, the only team to shut them out this season. Kick-off is at 14:00 on Saturday July 9th at ASK Slavia Stadium in Prague.