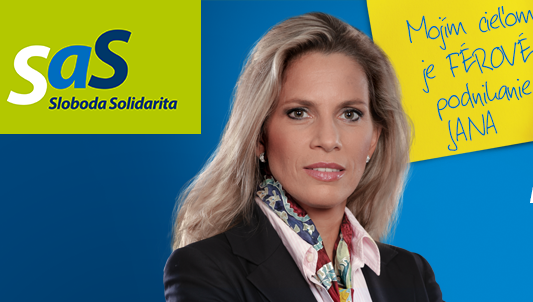 The upcoming Slovak parliamentary elections on 5 March will produce no major surprises, as the ruling Smer-SD party with Prime Minister Robert Fico at the helm looks set to grab over 30% of the vote again, while the political right has splintered into fragments. One contender for a place in parliament is former government party SaS (Freedom and Solidarity), which has progressive and more liberal policies than most. 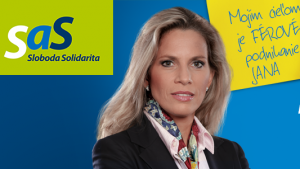 Here we present the answers of party vice-chair and MP Jana Kiššova to questions put to her by Slovaks Living Abroad on how she sees certain issues.

1.       Why did you make a personal decision to enter politics? What was your motivation?

If someone had asked me ten years ago about my going into politics, I would have probably laughed at the question. I spent my entire previous working life in the private sphere. For the longest time I worked in an IT company as a head of the HR department. From year to year, it was getting increasingly difficult. Not because the company did not do well. But because of an ever increasing amount of work, red tape, and foolish demands that robbed us of our time, cost money, and were annoying. I didn’t like it. I didn’t like the way the public offices functioned. You have to queue up for everything, officials are demigods, and if you have no connection, you will not get the things done. This state of affairs has nothing to do with a democratic society, and I increasingly felt that it should be changed. And so, when the opportunity arose, I did not hesitate a second.

I do not consider the fact of people leaving abroad to be necessarily negative. Just on the contrary, free travel is one of the achievements of the velvet revolution and democracy. The freedom and the possibility to choose the place to study, go on vacation or work and live is a good thing. Young people can learn a lot, gain valuable experience and language skills. It’s beneficial for all. It is, however, not so good when people leave their country because they are dissatisfied with many things at home. This means when their own country drives them out. If they leave because of its legislation, politicians, dysfunctional public services such as health, education, or unenforceability of the law. Or, if in spite of their honest work and best efforts, they do not earn enough money to lead a decent life. This is extremely dangerous.

Every person should, whenever possible, live where they feel well and at home. It’s good to acquire experience in other countries, to learn new things, and it’s great to bring all that back home. For many, such experience represents the foundation for their future career, gives them a competitive advantage over others. Experience gained abroad may benefit not only an individual person, but the entire country. Bring that experience home and thus contribute to a better life in your own country. If you are a person with strong ties to your family, friends and homeland, you will certainly always feel the pull of your country.

4.       Why didn’t you make it possible to vote via the Internet when you were in government?

Unfortunately, the shortened term of office prevented us from doing many things. Internet voting was one of them. It is not possible to introduce it rapidly merely through legislative amendment. Internet vote is a relatively sophisticated technological matter because of the need to guarantee anonymity, security and reliability. But I am confident we will introduce it in the future as it is one of our priorities.

5.       What would, in your opinion, be the consequences of the UK leaving the European Union for the Slovaks living in that country?

This is a complicated issue with many unknowns. It would depend on what would follow after the UK has left the EU. Like, whether the UK would remain a member of the EEC (European Economic Area), or whether it would replace its EU membership with various treaties, such as the treaty on Schengen, as is the case of Switzerland. There is a high probability that the British would try to preserve many things from the current functioning of the EU, and would not make too many changes at once. They would probably replace their membership by bilateral treaties with the existing EU member states, and the impact this would have on you would depend on those concluded with Slovakia.

6.       Many people left Slovakia because of deteriorating conditions for doing business. What main changes would the government that you would be a part of make for business?

They would definitely include the introduction of a flat tax and the reduction of its rate to 15%. This is not an arbitrary figure, it is the result of solid and proper calculations. Then would follow a reform of the social contribution system resulting in the simplification and reduction of the contribution burden. The measures that we envisage for the area of employment would lead to liberalising employment regulations with the subsequent decrease in unemployment and increased wages. We would certainly abolish tax licences and compulsory work health service for categories I and II. Then there are many measures aimed at eliminating barriers to doing business, reducing the financial and administrative burden for employers. We also prepare changes in the area of restructurings so as to prevent the repetition of the Váhostav case, and many others. All of them are specified in Agenda 2020.

7.       Your party’ s preferences move around 6%. Aren’t you afraid to expect a good result in the elections, also because of the turbulence within your party in the past?

Fortunately, the turbulence within the party is a matter of the past; today, our party is cohesive and it is based on decent and honest people. We have professionals who are able to assume responsibility for running the country, and we have solutions that would significantly contribute to improving the life for every citizen of Slovakia who is makes his or her honest contribution to this goal. We do not make empty promises of the type of ”triple salaries as from tomorrow,” but we offer genuine solutions. We compiled them under the economic reform programme entitled Agenda 2020. They comprise 6 steps aimed at making it worthwhile for people to work, do business and live in Slovakia. This economic reform program is our flagship in the elections, because we are convinced that only major economic reforms will get the Slovak economy going.