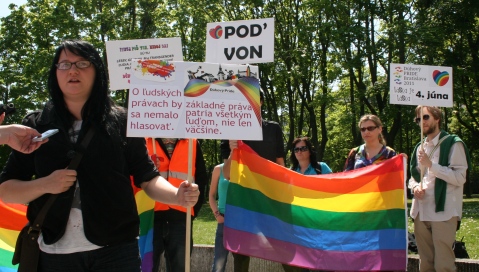 Today is International Day Against Homophobia, not something that will be celebrated by MP Stefan Kuffa from Igor Matovic’s Ordinary People and Independent Personalities party (OLaNO) who earlier this week declared publicly that in his opinion homosexuals were sick people, adding to this by later saying he would ban the Rainbow Pride parade, due to take place in Bratislava in June.

As could be expected, Kuffa’s comments met with an outcry from the LGBT community, who were soon demonstrating at parliament and demanding an explanation and an apology from Kuffa. In the end, Kuffa stuck to his guns, refused to apologise and that the only explanation was that it was his opinion.

In his anti-gay rhetoric, Kuffa said he liked how the Russians had dealt with it, as the gay pride marches there have been banned. He even mentioned how the World Health Organisation had classed homosexuality as a mental disease once upon a time (22 years ago). “Letting sick people run around the streets and leaving them without assistance is a serious error. We have to help them, we have psychologists, treatment centres” Kuffa said.

Gay rights activist and head of Rainbow Pride, Romana Schlesinger, says she doesn’t expect an apology from Kuffa, but although accepting that it is his opinion, she objects strongly to such statements being used in parliament and from the mouth of an MP. “I have no reason to apologise. I didn’t mean intentionally to insult anyone and I don’t think I insulted anyone”, Kuffa explained.

Now the LGBT community is calling for legislation that would make hateful comments aimed at homosexuals against the law, which would put Slovakia on a par with another 23 countries of Europe that already have such a  law. The statement of the LGBT community points out how almost 22 years since the general assembly of the World Health Organisation declassified homosexuality as a disease, Kuffa’s comments rung out in the Slovak parliament. By this they are showing how Slovakia lags behind when it comes to equal rights for lesbians, gays, bisexuals and transsexuals.

The Rainbow Pride march will take place on 9 June 2012.