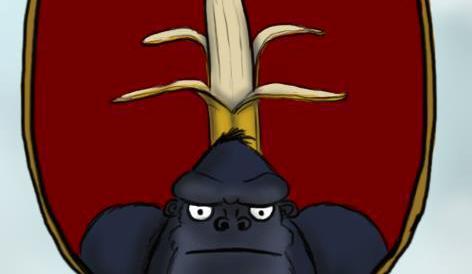 Today, the Ordinary People and Independent Personalities party of MP Igor Matovic proposed replacing the Slovak emblem with a new one depicting a Gorilla with a banana skin, in reference to the corruption allegations in the Gorilla affair.

Matovic unveiled the cartoon illustration at Parliament today, fixing it to the entrance to the building. Although the image has been on the internet for days (shared by The Daily on Wednesday), Matovic said the unveiling was in response to the statements of interior minister Daniel Lipsic yesterday, which confirmed the existence of the secret service records codenamed Gorilla.

“After the interior minister confirmed the existence of the Gorilla file, corrupt politicians no longer have any right to hide behind the state symbol. That’s why we created our own”, announced Matovic, who is known for his charismatic and controversial ways of drawing attention to issues.

“There are politicians who have been robbing Slovakia for 23 years and citizens don’t deserve to be led by such people” said Matovic, adding that “they are criminals”.