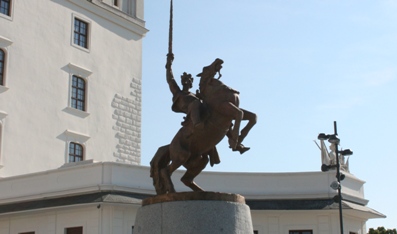 It seems that too much attention is being given in Slovakia to what could be called xenophobic issues, such as fines for breaches of the Language Act or fears about the consequences of dual citizenship with our Hungarian neighbours, not to mention the controversial Svatopluk statue that has been the spark for demonstrations and all kinds of disputes.

Now the attention has turned to the symbols of patriotism introduced by the former government in schools, with a group of coalition MPs calling for their removal from classrooms.

MPs from the Most-Hid party (which can now be classed as a Hungarian minority party), joined by colleagues from the pro-liberal SaS and the SDKU, are against the clause in the law demanding that the national flag, national anthem and preamble of the Slovak Constitution be displayed in every classroom in the country.

The fourth coalition party, the Christian democrat KDH, is standing silently in the sidelines, as it selects carefully what it does or does not support.

The group of MPs led by Ondrej Dostal (Most-Hid) are proposing that the law be amended so that these symbols of Slovak identity be removed from classrooms, while leaving them to be put on display elsewhere in the school.

It all seems rather childish, as if these symbols would infect children to become staunch supporters of the nationalist SNS party in future or breed contempt for other nations.  I can understand why certain things should not be laid down by law, but even the Prime Minister herself has said, ironically, that this law doesn’t have to be respected.

The MPs are claiming that having these symbols in classrooms is in fact an act of dishonour, but what exactly is meant by that I am unsure.  This constant tug-of-war between promoting Slovak patriotism or bolstering the inferiority complex of the nation and trying to be culturally tolerant seems like it will continue for some time to come, but is there really any point?