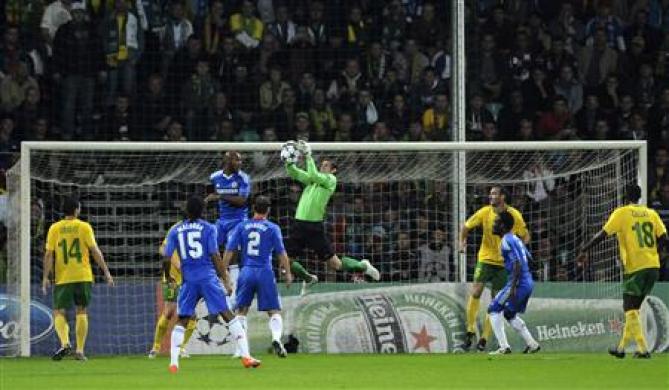 The Champion’s League newcomers, MSK Zilinia, kicked off the match intent on causing an upset.  As early as the 47th second of the match the home side marked their intent to make an impact on their group with an effective through-ball from club captain Robert Jez to midfielder Emil Rilke down the right flank.  Thanks to a clearance from Alex nothing came of the attack – but Zilina showed they are more than capable of living up to the attacking reputation they’ve earned for themselves.

Though Chelsea struggled to impose themselves early on, it only took 13 minutes for them to find themselves  1-0 up.  A brilliant through-ball from Benayoun was latched on to by the industrious Anelka  who quickly passed to Malouda in the middle.  Under pressure, the Frenchman left the ball to roll for Essien, who fired home from just inside the penalty box.

Essien’s goal signaled the beginning of Zilina’s troubles.  Though the home side continued to press forward it was the visitors who began causing the most problems.   Nicolas Anelka, in particular, began looking more and more dangerous as he outpaced his defenders and seemed to find the end of every pass that came his way.

The vibrant Anelka reaped his reward in the 24th minute.  Malouda, in a not-very-threatening position, chipped the ball over the home side’s back four.  Anelka outpaced the defense to latch onto the pass on the left side of the penalty area before calmly slotting home.

Any hope of a comeback was quickly snuffed out 3 minutes later.  With Chelsea falling into a pattern of efficient passing that has been a hallmark of Carlo A

ncelotti’s reign, Chelsea pressured the home side into conceding a corner.  A Florent Malouda corner found John Terry who headed into the bar.  A goalkeeper error from Martin Dubravka saw him block the ball from bouncing out.  Instead, the ball conveniently fell directly in front of Anelka who had no trouble tapping in for his second.

Zilina quickly became unmotivated and unable to keep up with Chelsea for much of the remainder of the first half.  It wasn’t until the 40 minute that Zilina began to formulate a meaningful attack, the most notable being a Vladavic strike from distance that saw Cech palm away to right, before a cross found the impressive Bello, who headed wide.

The 2nd half started with Zilina intent on getting back into the game.   They pressed forward with numbers but were quickly punished by the former Liverpool playmaker Yossi Benayoun.   Benayoun played another brilliant ball to the pacey Sturridge who easily outran the defense.  Sturridge rounded the keeper befor

e calmly placing a left-footed shot into the back of the net.

With the result all but wrapped up, Chelsea began to lose their sense of urgency.  As the half wore on, Zilina finally began to mount a credible atta

ck on the visitors. From the 50th minute onward it appeared as though Zilina recognized their defense couldn’t stop Chelsea’s forward line – something that was compensated for by pressing Chelsea’s defense.

Zilina finally responded to Chelsea’s goals with one of their own in the 54th minute.   Jez put in a long cross which headed straight to Petr Cech, who slapped the ball directly onto right-back Branislav Ivanovic’s face.  Forward Tomas Oravec was able to capitalize on the error by tapping in for Zilina’s only goal of the evening.

Zilina’s attacking form continued, and for most of the 2nd half they looked the more impressive and dangerous of the two teams.  Unfortunately they weren’t able

to build on their opener, and the game eventually descended into a midfield battle which neither side clearly won.

As the final whistle blew Chelsea could take comfort in their solid display, as well as in gaining 3 points from the opening fixture of this tournament.  Zilina, on the other hand, will be aware that for all their attacking prowess they will not be able to mount a serious run at the knock-out stages without a much sharper defense.