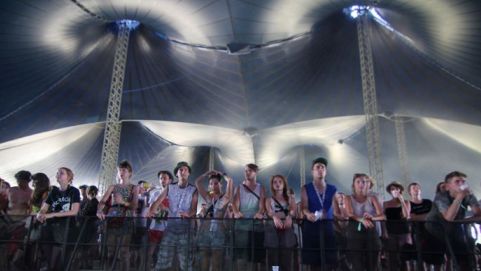 This famous festival, which has been in the running since 1997, started as a one day festival with around 2,000 people in attendance.

It is now operating with 11 different stages, representing not only music but culture as well and has grown vastly in the last 15 years. It is now held over 4 days at Trencin Airport and this year was attended by over 30,000 people. It was originally named the “Kráľovská pohoda” and changed to Bazant Pohoda in 2004 when the official partner of the festival became Zlaty Bazant.

The festival consists of music from many genres, bands representing rock, punk, folk, rockabily, world music, reggae, ska, pop, jazz, rave, and many other genres of dance music, folklore and even classical music can be seen.

There are also theatre performances, ballet and modern dance performances, films, presentation of literature, design and visual arts, discussions on different topics of relevance as well as presentations and work shops run by non-profit organizations.

Thursday the masses started arriving and the fields, bars and tents started filling up. The heat of 37 degrees wasn’t hot enough to deter anyone. Things really started buzzing. The opening night hosted bands such as Plastic people of the universe, Lou Reed, The astroids in Motion, Puding pani elvisovej and Caribou.a good mix for setting the mood for the up and coming festivities of the weekend.

For many years running till now Pohoda has been renowned for bringing some of the worlds top bands, DJ’s, musicians and performers to Slovakia.

This years line up lived up to these expectations and besides a little technical problem due to extreme bursts of summer rain all ran smoothly. Fridays line up starting with the likes of the Mangrove Steelband ( UK), The Heavy ( GB), Then leading in to the afternoon with, the Budapest Saxaphone Quartet ( H), and with the heat of the day dying down bands such as Elbow (GB), Kasabian (GB), Yann tiersen (F), Bat for Lasses (GB), White lies (GB), Eskimo (USA), Jamaican Legends (JAM), Orbital (GB), Sebastian (F) and Toky and Loktibrada (SK) and Emika (GB) heated the evening up.

Besides being able to listen to melodic tunes or getting those feet dancing and jiving there were many cultural things to be done during the day. There was an opportunity to get creative at the ‘creative zone’ which provided paints and canvas allowing people to paint and express their emotions in an artistic way as well as the Good market and design market crews providing the public with cute little buys. ‘Nice meadow’, an area provided for the expression of street art and a textile installation on exhibited as well as a photo exhibition and a lonely piano waiting to be played on.

Besides this there were many chill out zones, food stalls and even an outdoor cinema where films such as Rolling Stones, ‘shine a light’ , ‘Trou de Fer’ and ‘Dust and glitter’ could be seen. There was even something for the literature fundies, ‘literature club’, here one could read, listen to readings and poetry, or just relax. Also for those of you who are more extraverted with your expression in a poetic way, there was the possibility to head to speakers corner to express your self and opinions.

Another great feature of this festival is the ‘silent disco’. All involved receiving headphones and dancing to the music of various dj’s. And/or Roller disco where lessons are held for those unaccustomed to rollerblading or skating and who can then enjoy the music whilst moving fluidly. Even if you just want to improve your standard dancing skills, this option was available as lessons throughout the day were been taught.

Pohoda doesn’t leave one a moment to get bored, If you are the adrenalin seeking junky then there is even a spot for you to hang out. If crashing bumper cars, riding roller coasters, playing frisbee or winning foosball tournaments is for you then you are all set.

With it being really hot and all Semtex provided an Aquapark, an area to cool down, when that was too far away to get to then the water blower would suffice just fine. Rickshaw taxis provided by ‘Ekopolis’ a non profit organization working to conserve and save old trees could be taken around the festival, they could even have taken you round to the curoprox stand to get a fresh toothbrush had you found yours to be sitting at home and not in the bag where you thought you had put it.

And when you think you are the only person to enjoy this all, you can share the experience by writing a postcard to your friend and posting it.

It is a festival to be tried by all as it provides something for everyone, not even nature was forgotten, vegan food, A sunflower garden, solar powered charging facilities and dancing to the clangs of a kettle drum band as the sun was rising added to the charm of one of the top 50 rated festivals in the world.