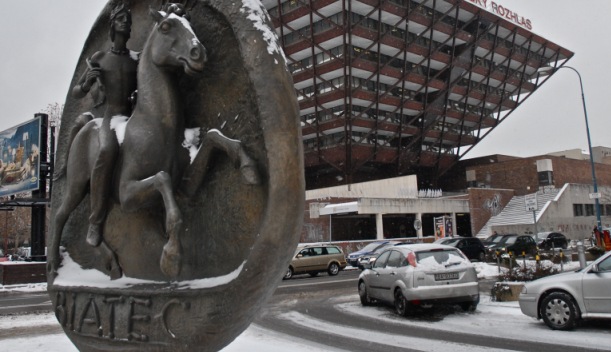 The annual rate of euro area inflation, as measured by the Harmonised Index of Consumer Prices, was 2.7% in February, almost unchanged from its level in January. According to Eurostat, the euro area’s gross domestic product for the fourth quarter of 201l grew by 0.7% in year-on-year terms and by 0.3% when measured against the previous quarter (by comparison, GDP for the third quarter rose by 1.3% year-on-year basis and by 0.1% quarter-on-quarter). The exchange rate of the euro against the US dollar appreciated during February in comparison with the previous month. At its meeting on 3 March 2012, the ECB’s Governing Council decided to leave the key ECB interest rates unchanged, with the main refinancing rate standing at 1.00%, the marginal lending rate at 1.75% and the deposit rate at 0.25%.

In the Czech Republic, Hungary and Poland, the annual rate of change in the HICP inflation rate increased in February in comparison with the previous month to, respectively, 4.0%, 5.8% and 4.4%.  In the fourth quarter of 2011 GDP growth in the Czech Republic fell to 0.6% year-on-year, from 1.3% in the third quarter, according to Eurostat. In Hungary, annual GDP growth stood at 1.5%, unchanged from the previous quarter, and in Poland it rose to 4.3%, from 4.2%. The exchange rates of the Czech koruna, Hungarian forint and Polish zloty appreciated in February in comparison with the previous month. None of the central banks of these central European countries adjusted their monetary-policy settings in February; Česká národní banka left its key rate at 0.75%, Narodowy Bank Polski at 4.50%, and the Magyar Nemzeti Bank at 7.00%.

Annual GDP growth was higher in the fourth quarter than in the third quarter. In terms of output performance, GDP growth was boosted mainly by higher value added in the industry, construction, and trade sectors, and to a significant extent, at the end of the year, by net taxes. On the consumption side, economic growth continued to be driven substantially by external demand, which recorded a slightly higher annual increase in the last quarter of the year. With both public and private consumption continuing to decline in year-on-year terms, consumption demand contracted and contributed to the year-on-year fall in domestic demand. The significant year-on-year increase in gross fixed capital formation dampened the decline in domestic demand, which was more moderate than in the previous quarter. Net exports continued to be positive in the fourth quarter, and made the largest contribution to GDP growth. The upturn in the macroeconomic situation in the period under review was reflected in a sharp rise corporate profits and consequent increase in firms’ investment activities. The balance of payments current account for the period January to December improved and recorded a surplus. This reflected improvements in all the constituent balances except for the income balance. Despite relatively sharp economic growth and a substantial rise in labour productivity, the labour market situation in the last quarter was marked by slower growth in wages and unemployment and by a rise in the number of unemployed. Unit labour costs declined year-on-year in the fourth quarter, as the annual growth in compensation per employee was lower than the rise in labour productivity. The unemployment rate declined in comparison with the previous quarter, but remained at a relatively high level.

In Slovakia, the annual rate of HICP inflation in February declined month-on-month, to 4.0%. Inflation was affected mainly by lower growth in food and services prices, which was partly compensated by a higher rise in energy prices and prices of non-energy industrial goods. The annual rate of change in industrial producer price inflation increased in January in comparison with December, due largely to a sharp rise in inflation in the energy component, mainly in prices of gas supply and prices of steam and air-conditioning supply (electricity prices declined year-on-year). Prices of agricultural products recorded a year-on-year increase in January, following a drop in the previous month. Construction work prices rose at a slower pace.

The balance of payments current account improved month-on-month in January 2012, due mainly to a rise in the trade surplus. The services balance and current transfers balance deteriorated slightly in comparison with the previous month.

The annual growth rate of the industrial production index increased markedly in January in comparison with the previous month, driven up mainly by the sector of electricity, gas, steam and air-conditioning supply and to a lesser extent by manufacturing industry. Among the principal segments of manufacturing industry, the largest rises in production were recorded by manufacture of machinery and equipment and manufacture of computer, technological and optical products, while production in the transport equipment segment declined in month-on-month terms. Construction production in January declined quite sharply year-on-year, after rising in the previous month. As for sales in selected sectors, their annual rate of change increased in January, reflecting mainly stronger sales in the sectors of industry, retail trade, and wholesale trade. By contrast, sales growth in the information and communication sector slowed markedly, and sales in the construction fell year-on-year. The overall economic sentiment indicator in February declined both in comparison with the previous month and in year-on-year terms. Confidence indicators in the industry, construction, and services sectors declined, while the retail trade confidence indicator and consumer confidence indicator both improved.

Annual growth in the average nominal wage was substantially higher in January than in the previous month, and real wage growth also increased in year-on-year terms. All sectors apart from food service activities contributed to the jump in nominal wage growth. On the other hand, the employment level declined year-on-year in January, due to the decline in construction sector employment becoming more pronounced and also to worse employment figures in the transport and storage sector and in the trade sector. The rate of registered unemployment increased month-on-month in January, to stand at 13.7%.