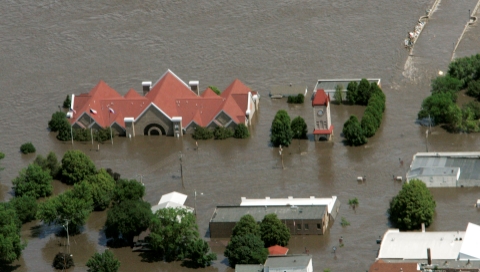 In June 2008 the National Czech and Slovak Museum & Library (NCSML) in Iowa, USA, was nearly destroyed by a terrible flood. The NCSML managed to raise the necessary funds to move the museum and library to safer ground across the street in probably the biggest ever building relocation in the US to date. Now everyone can watch the event as it happens on the NCSML webcams.

The video programs will be used to illustrate the history of the museum, the relocation, and flood mitigation efforts. In addition to viewing the live action, cameras are also recording the relocation of the building for production of a time-lapse video of the move at a later time.

“Technology is amazing,” said Gail Naughton, President/CEO of the National Czech & Slovak Museum & Library. “We have so many friends around the globe who have supported our mission that we wanted to be able to include them in our progress and feel a part of what we are trying to accomplish.”

After successfully raising $25 million, the museum and library broke ground and began construction Dec. 15, 2010.  The decision to move and expand the current facility was made last year. According to Jeremy Patterson of Patterson Structural Movers, the 1400-ton structure is thought to be the largest museum ever to be moved in the U.S.

It will be moved and elevated three feet above the 2008 flood level. A 30,000 sq. ft. expansion will provide room for additional exhibition galleries, collection storage, a theatre, enlarged programming space, and a Museum Store.

A crew from Patterson Structural Movers of Washington, Iowa, has already begun welding 100 ft. beams to be used in the relocation. Once beams and jacks are in place, the building will move a quarter mile per hour to its new location across the street. The entire move will take 45 to 60 days beginning in May.

You can watch the progress of the move on two webcams,  which are recording at one frame per second.

“The two high-definition cameras were necessary to get a close up view of the museum being moved off its current foundation. Once the building is turned, the west camera will allow for viewing the elevation and positioning on top of the parking garage,” said Gail Naughton.