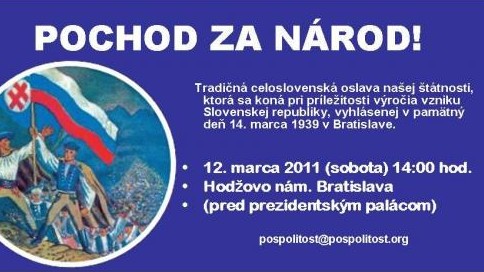 Tomorrow, Saturday 12 March, extremists from the Slovenska Pospolitost movement will march through the streets of Bratislava to commemorate the establishment during the war of the pro-fascist Slovak state. 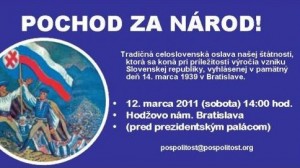 The ‘March for the Nation’ will start at 2 pm, most probably in front of the Presidential Palace, then proceed through the streets of Bratislava to the Martin cemetery in Ruzinov, as this is where the Slovak president at the time, Jozef Tiso, was laid to rest.

The march coincides with a series of anti-fascist events from 11-15 March called Enough of Being Silent, which have been organised against fascism and celebrating the 14 March 1939, when the Slovak wartime state was established. Police will have a sufficiently strong presence to deal with any of the conflicts or troubles that these events tend to provoke.