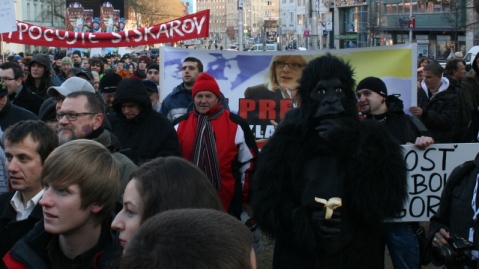 TV news channel TA3 reported today how new charges are being brought forward in the so-called Gorilla corruption affair, with the police now focusing on specific cases that are outlined in the reports from an SIS secret police operation pointing to alleged ties between financial group Penta and politicians and public servants.

Police commissioner Tibor Gaspar told the news channel that new circumstances had come out of the investigation that would likely see the charges extended to include the charge of corruption. To date the charges were generalised as establishing and supporting organised crime, but now the police are starting to dissect the reports into smaller cases.

The Gorilla reports led to regular mass demonstrations and protests, but most of the pressure fizzled out after the March 2012 elections. Many are justifiably doubtful that anyone will ever be charged in the case, because if the reports are true, it points to an extensive web of people in high places, which in Slovakia is often too high for the arm of justice to reach.