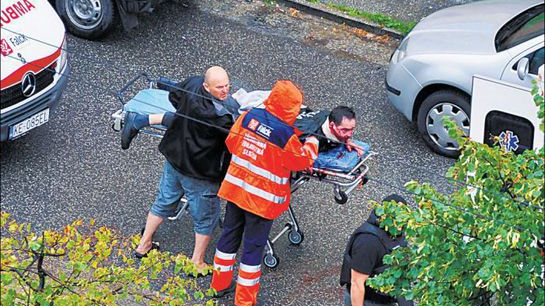 The media have had a hard time getting information surrounding the grave shooting of 8 people in Bratislava yesterday, but now things are starting to be clarified thanks to a press conference held today, 31 August, by interior minister Daniel Lipsic, together with chief of police and head of the district police responsible for Devinska Nova Ves.

Among the revelations was that the crazed shooter had firstly been shot near the heart by a police officer, which the autopsy concluded was the killer blow. He still had time after that to shoot himself in the head, though.

Furthermore, the 5 victims in the flat were specified as being a mother, a daughter and her fiancee, another daughter and her husband, with the final victim in the family being their 12-yr old son. Relatives had been searching for the boy last night claiming him missing, as they had no idea that he was also laying in the pool of blood with his grandmother, mum, aunt and her friend.

Another assumption that was overthrown was that the killer was a former professional soldier. Chief of police Jaroslav Spisiak explained that the killer had never been a police officer or a professional soldier, that he had only undergone compulsory military service (1981-1983) and was a member of the so-called Club of reserve soldiers (like the Territorial Army in the UK).

Chief of Police, Jaroslav Spisiak, then started to give a profile of the killer:

Harman had been employed in various companies and was regarded as a serious and responsible worker who did his job responsibly.

He had been unemployed since 1 August 2008, and so spent his time with his hobbies, which included shooting in competitions, mostly with his shooting club.

He was friendly with the club president, who said he had never acted strange, aggressive or complained of problems with his neighbours.

He didn’t really communicate with neighbours and lived a solitary lifestyle.

He had a brother and sister and his parents are still living.

He never showed signs of being aggressive or of having mental problems.