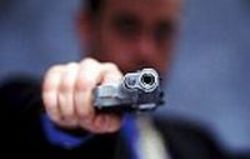 An armed robber rushed into the branch of Uncredit banka in Dubravka, Bratislava, this evening at around 5.45 pm and demanded a specific amount of money. There were four employees in the bank at the time, but the female clerk that he approached did not get time to hand over the money.

He was nervous and became impatient waiting so started counting down from 10. As he still hadn’t received the money after finishing counting, he shot at the woman, hitting her in the arm. He then turned to another cashier and grabbed what money she had at hand before fleeing the scene.

The injured woman, aged 40-45, was rushed to hospital, but her condition is not fatal.

The man was about 170cm tall, wearing denoms and a greeny-grey sweatshirt. Police are currently on site with a sniffer dog looking for clues and are pleading to the public for any information.