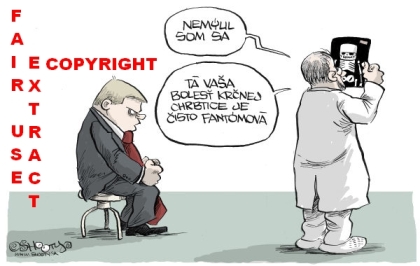 Slovak daily SME has finally won the case concerning a caricature from July 2009 of then PM Robert Fico created by Slovakia’s most famous caricaturist nicknamed Shooty, and so will not have to apologise to the politician, who tried to sue the newspaper over defamation of character.

The caricature shows a lookalike of Smer-SD party head Fico being told by a doctor that his back pain was non-existent as he was spineless, but the Bratislava IV District Court rejected his claim in July 2010. Fico was demanding EUR 33,000 in damages from the newspaper because of the caricature.

Fico appealed against the decision, but the daily has announced that the Bratislava Regional Court reaffirmed the earlier ruling of the District Court, by which Judge Silvia Walterova determined that the comment by the caricaturist concerned the prime minister as a public official and not Fico as a private individual. She justified her ruling by saying public figures had to be prepared to withstand a greater level of criticism than ordinary citizens.

Another of Shooty’s drawings is being sued by head of the SNS nationalist party Jan Slota, as it shows the party logo with a magpie instead of an eagle. Previously in Slovakia courts were more generous in their deliberations, with various high-ranking officials raking in money from the press thanks to a curious Press Act, which has since been amended.

Probably the biggest recipient of press lawsuit revenues is head of the Supreme Court, Stefan Harabin, who has successfully sued the press several times through the judicial system he oversees. Harabin received EUR 100,000 for a caricature from daily Pravda back in 2006, and with other lawsuits he has claimed an estimated EUR 181,000 over the space of three years.