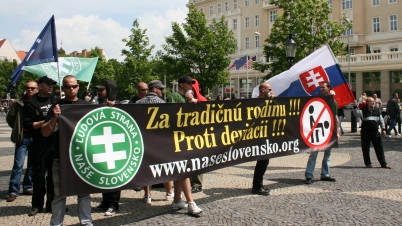 Yesterday, coalition parties KDH and SDKU held together to vote against a proposal to include a sexual minorities committee as part of the Council for Human Rights, Ethnic Minorities and Gender Equality, with just one vote making the difference.

Even though the Prime Minister Iveta Radicova voted in favour of the committee being established, her SDKU ministers joined the Christian democrats of KDH to block the proposal, which was initiated by deputy PM for Human Rights, Rudolf Chmel from Most-Hid, and fully supported by liberal coalition partner SaS.

SaS representatives are saddened by the stance of their coalition colleagues, with labour minister Jozef Mihal saying a bit more tolerance in present day Slovakia would do no harm at all. Mihal admitted that it was pointless trying to push through the motion just now due to the position held by KDH and SDKU.

As the vote was taking place at the Government Office, a group of Rainbow Pride gay rights activists were holding a demonstration outside. They want the PM to hold open dialogue with them as members of the LGBT (Lesbian, gay, bisexual and transgender) community do not enjoy various benefits with regard to accepted partnerships in society, which is their biggest contention.

Interior minister Daniel Lipsic from KDH says the issue is not about being heterosexual or not, but that the purpose of marriage is the creation of a family, which is something homosexual couples cannot do. He therefore made his party’s stance against recognised homosexual partnerships clear.

In March the government gave the thumbs up to the creation of six human rights committees, while rejecting only the one for non-heterosexuals at the demand of the KDH party. The committees serve as the Human Rights Council’s permanent advisory bodies.

Rainbow Pride spokeswoman Romana Schlesinger told journalists at the demonstration that the KDH has been blocking the proposal for two months now, and that the party is essentially anti-homosexual. She underlined how non-heterosexuals are the only group in society that is still having its human rights denied.