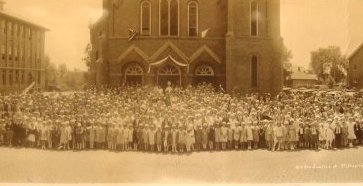 The Slovak community living in the U.S. are about to lose a piece of their history. What is claimed to be the oldest Slovak Roman Catholic parish in the USA, the Parish of St. Stephens, based in Streator, Illinois, is to be abolished next month. The local community is disturbed at the wave of change.

St. Stephen’s, a Roman Catholic parish, was founded in 1883 by Slovak immigrants who had made their way to Streator, a thriving coal mining community. At that time, parishes in the area were established on an ethnic basis – St. Anthony’s (1881) for German Catholics, St. Stephen’s (1883) for Slovak Catholics, and St. Casimir’s (1916) for Polish Catholics. The ethnic parish identity remained strong for most of the 20th century, but began to wane in its later decades.

Our daily received news of the plans from Mr. Sean Peters, local resident of Streator and activist against the abolition of this small piece of Slovak history. He told us how Streator, Illinois, was the location of both the oldest Slovak Catholic parish and the oldest Slovak Lutheran congregation in the U.S. On 29 September 2010, however, the Slovak parish  of St. Stephen will cease to exist, as all the parishes of Streator will be merged into a new parish on that day.

The pastor of the Streator parishes has pursued his goal of closing all the parishes in Streator despite opposition from many locals.
You can read more about the community and the case at the following links: