Hungary wants to close George Soros’s Central European University in Budapest, with students and universities around Central Europe expressing their disapproval and offering help. CEU students have taken to the streets of Budapest, demanding the government and the President veto the Lex CEU. 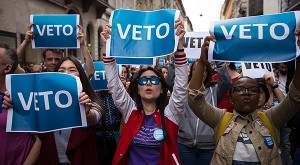 The Hungarian Parliament sanctioned the Amendment to the Higher Education Act, the “Lex CEU”, on 4 April. According to the new legislation, all foreign universities need to have a campus in the land of their origin and only then by a mutual intercountry agreement they can operate in Hungary. The bill is thus restricting the function of CEU, founded by George Soros, a Hungarian-born American business magnate, whose accreditation was accepted in New York, but it holds campuses in Budapest only.

CEU students have demonstrated in the capital city to express their disapproval as the legislation limits the freedom of education and democracy which is deeply embedded in the philosophy of universities. “What do we want Áder to do? Veto! Free the country, free the university” the crowd shouted as they marched on the streets, referring to János Áder, Hungary’s president, who had to decide on the matter by 10 April. Eventually, he signed the document and noted that he did not find any objections that would restrain freedom.

Many believe that the core of the issue lies in the opposing ideals of the right-wing Hungarian Prime Minister, Viktor Orbán, and George Soros as Orbán’s anti-migrant policy is in a contradiction with Soros’s liberalistic views. The CEU welcomes students from all around the world and so supports the blending of people from various cultural backgrounds and leftist worldviews.

As a sign of support, many other European universities declared their willingness to help their Hungarian fellows. In Prague, the Faculty of Arts belonging to Charles University organised a protest where hundreds of people gathered to show their disagreement with the new legislation. “If the government argues with the political neutrality of the law, we are convinced that this is an attack on the liberal values that the institution represents” says the protest organiser, Sára D. Vidímová, a student from Charles University.

Furthermore, the Czech Minister of Finance, Andrej Babiš, proposed a plan to relocate the university to Prague. Although the idea is a very generous gesture, the realization seems slightly unrealistic with the university’s 1300 students, still the intention marks the Czechs’ moral support. Other states like Latvia and Austria also offered the relocation of CEU to their capitals.

What is Slovakia’s response?

Although Slovakia is a neighbour of Hungary and they share a close relationships, the Slovak government and politicians remain passive in the matter. Slovak education minister Peter Plavčan even stated that Slovakia had enough universities and he would not consider bringing CEU there as a right decision.

So far, the only act that supported Soros’s university was expressed in the form of an open letter to the Hungarian government from two deans from Comenius University in Bratislava.

Due to the lack of support shown from Slovakia, students of C. S. Lewis Bilingual High School organized a demonstration in Bratislava on Tuesday, 25th April. The organiser was 18-year-old Michaela Weberová, who was deeply upset by Slovakia’s passivity. “Viktor Orbán is trying to get the content of education under control and that is very dangerous” added Kristína Kállay, Weberová’s teacher, supporter and also a graduate from CEU.

Student of the Department of English and American Studies, Constantine the Philosopher University in Nitra