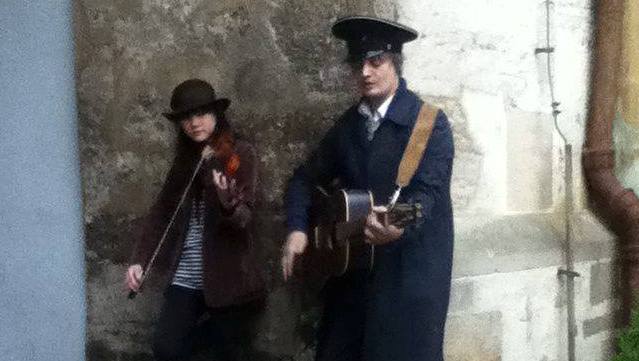 It is 25 June in KC Dunaj in Bratislava, he is late and the crowd is waiting impatiently. Personally, I’m suffering among them to get the first ever glimpse of my hero coming on stage. But then I get tired of the people around me saying banal things, not knowing what a legend is about to take the stage. So I give up and sit down at the café next to the main hall where there’s no tension. I breathe some fresh air and talk to a friend. Then her eyes light up suddenly and she says to me: “Look who’s coming”. My first glimpse of Mr. Pete Doherty.

I turn around. There he goes with his suspicious crew. Instead of rushing to the stage, he goes to the bookshelves that cover the wall of the hall. He calmly browses at the books with his back to the room full of visitors that paid to see him in a cage. Then he looks back with a coy smile on his ash pale face, roofed with a military hat.

What a smile! His face is not expressing any pressure, just the pure sweetness of a child of the century. Then he turns to a painting on the opposite wall, studying it for a while. Then some organiser grabs his arm and leads him backstage. That was a carefree, intoxicated Pete Doherty in his essence, putting on a little act for a handful of fans.

But Pete leaves, too! “You never know when he goes somewhere, when he will die!” says a young Slovak next to me. The audience is told there is technical problem and to wait another ten minutes. There is wildness in the air. Pete´s demons that he can´t control, control the people around.

The little girl that plays the violin arrives. Then big Pete. He gives a few autographs, shakes a few hands, throws a few cold beers to the audience, making his peace with them. He is offered a bottle of Slivovica, a strong Slovak liquor with over 50 percent alcohol. Sure, he takes a sip and puts on a funny grimace. He slides into What a waster. Then one song after another with no pause.

“Did you see the stylish kids in the riot?” I see them now. The drunk Slovak kids that were waiting in front of the stage from early on, drinking vodka and rum are stirring the space, dancing wildly in a punk style, hitting everyone. This makes Pete open his eyes from time to time. Someone throws a plastic beer bottle at him, but he shows no concern. He gives the sinner a fatherly face. Once again he looks like a father when he stops a song to repair his violin friend´s mistake. He teaches her half-way through the concert, good old casual Pete. She is maybe half his height.

All the waiting is forgiven after a while when it becomes clear that we´re witnessing his full effort to show his best. He´s sweating, getting whiter and whiter, his tired face not fitting his energetic and unmistakable hands on his guitar that change the rhythm frequently. He ends the set with a Happy birthday to you song for some Doris and says: “You’ve been a great audience”. He leaves and doesn’t come back even after audience’s loud chants. Probably because he wasn’t allowed to light a cigarette during the show.

After the show I meet two girls. They have a friend backstage who allegedly supplied Pete with drugs. I’m surprised, cause I thought Pete was off them. Then I realise that there is that good old rock and roll look on his face lately. Is it for good or bad? I´m certainly glad I finally got to see and hear him.