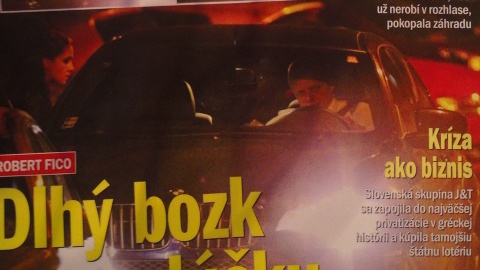 The Slovak press is full of reports today on how Prime Minister Robert Fico was caught embracing and kissing his young secretary Jana Halászová, after the magazine Plus 7 Dni published photographs yesterday of the PM picking the young lady up from her flat then bringing her home in the small hours, which is when the passionate embrace was caught on camera.

According to the report, the PM collected his assistant after 6 pm on her ‘name-day’ from her flat in Bratislava, unaccompanied by a bodyguard or driver. They then headed off for a 160-km trip to a mansion and restaurant in the village of Čereňany in the region where Fico grew up, where they then spent the next four hours or so before leaving around midnight.

After the journey back, the PM dropped her off at her Bratislava flat, but not before a photographer from the magazine snapped a shot of them having a long kiss goodnight. Ms Halaszova has been at the PM’s side for some time, having worked previously for him at his SMER party headquarters before joining him also at the government office.

In response to the revelations, PM Fico reacted in a similar fashion like when his voice was allegedly caught on a recording talking about parallel financing for his party, or when queried about his involvement with the financial group Penta as part of the now infamous Gorilla secret police transcripts – i.e. claimed innocence, or simply refused to comment.

Fico’s spokeswoman Beatrice Szaboova relayed his response that it was all just “a farce that was not worth commenting on”, while propping up his alibi by saying how four other people came and left the mansion at the same time as he and his secretary. Ironically, the PM was spotted in a gay bar almost 3 years ago with the very same Ms Halaszova. No further comment will probably be made on the affair, no pun intended.