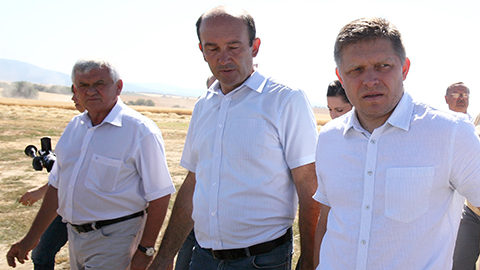 Prime Minister Robert Fico accompanied by agriculture minister Lubomir Jahnatek, head of the agriculture and food chamber  SPPK Milan Semancik, and an entourage of invited journalists headed off to Fico’s birth region today to check out this year’s harvest in what can only be referred to as a PR campaign.

During his visit to the farming co-operative in Neverice in the Nitra Region, the prime minister noted how this year’s harvest was better than last year, and how this could even lead to slightly lower food prices. It is basically all speculation, though, because there is no or very little chance of food prices in Slovakia being cut.

Fico threw the ball into the court of retail chains, though, saying they should have the “healthy sense” to cut prices, which would help everyone and also combat inflation pressures.

The whole exercise and the resulting claims can be classed as a mere populist campaign reminiscent of the kind that used to be seen during communism. Various marketing experts speaking to SME daily agree that the PM is out to gain the favour of the rural voters and increase his already swelling support and socialist image. Maybe we can expect to see the return of the famous five-year plans next.