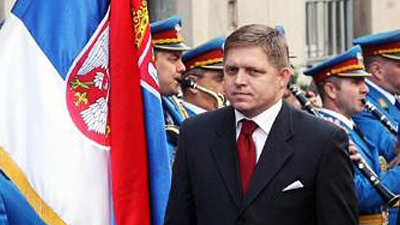 Those, who follow the news and political happenings may already know, that the Slovak Prime Minister Robert Fico’s decision to buy the remaining 49% of SPP’s (Slovenský Plynárenský Priemysel) shares created a certain, rather serious situation in the political sphere.

This deed was followed by a quite aggressive response from the opposition, in the form of an attempt to make the Prime Minister resign from his position. Although the representatives of KDH, Híd-Most,SaS, SDKÚ, Nová väčšina and OĽaNO all signed the initiative, Fico says that their request is ridiculous and not achievable.

What the exact purpose of creating this situation was remains a question; however, there are some theories brought up that happen to make sense. According to Ábel Ravasz, an analyst for Publicus Slovakia “the opposition was well aware that there was little chance of its motion of no-confidence to pass through the parliament; Smer’s MPs are known to vote as a bloc, with little wavering. Still, the opposition, which is often seen as weak and divided, tried to put up a good show for potential voters by acting swift, decisive and unified. They got hold of an issue that has a certain potential to become a major scandal, and tried to use it to its best.”

The main cause of the problem was the fact that some new information was revealed, proving that the business-related documents were written in the J&T Investment Advisor’s computer instead of one belonging to the Ministry, giving the public a reason to think that the trade was more favorable to the company than to the country.

Also, SPP’s recent loss-making profile makes the situation even worse. Fico says, however, that all is for the country’s best, and that the problems connected to the loss can be solved by SPP’s other revenue. As Ravasz sees it, “Fico and his government will be under pressure during the next period to prove the rationality of buying the rest of the shares of the SPP. They also forced themselves into a pledge to keep the gas prices low, which could turn out to be a very troubling pledge should global prices soar in the future.

Smer has also expended some of its credit, trust with the voters: should another similar tell-tale sign of Smer coordinating with oligarchs surface, the popular reaction might be much more intensive than it was now”. The results and consequences of the situation remain to be seen.

After two grueling days in parliament, the opposition finally failed to oust PM Fico on Thursday afternoon, after which the PM said he would resist a no-confidence motion every week if he had to.