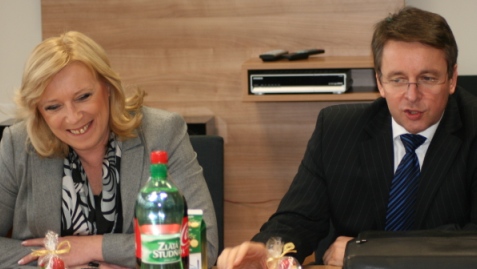 Acting Prime Minister Iveta Radicova confirmed the news today that the EU members had agreed on how to deal with Greece’s debt and the increased European Financial Stability Facility (EFSF).

Talks went on long into the night, but the outcome was that private banks and creditors holding Greek debt agreed to take a 50% cut in the value of their Greek bonds to date, which will now be converted into new loans. They had no real option, because if Greece had fallen intro bankruptcy, they would have probably lost the lot.

This means Greece’s debt will drop by around EUR 100 billion, which was welcome news for Greek PM George Papandreou. He said Greece had gotten out of a trap with a new era ahead for the country thanks to the debt write-off.

PM Radicova negotiated that Slovakia would be the only country not to contribute even a single cent to the higher second rescue package for Greece, which was increased by an additional EUR 11 billion to EUR 130 billion.

The EFSF itself was increased to EUR 1 trillion, a compromise over the EUR 2 trillion proposed. Slovakia and the other eurozone countries will not have to pay more money to the fund, though, as the hike will be covered in other ways.

The EU leaders agreed on the recapitalisation of 90 European banks, firstly using private investors, then their respective countries and if that it not enough, then from the EFSF bailout fund.

Finance minister Ivan Miklos said he was very glad that a real solution had been found regarding Greece and the EFSF, while adding that it was a pity the Slovak government had to fall because of it.