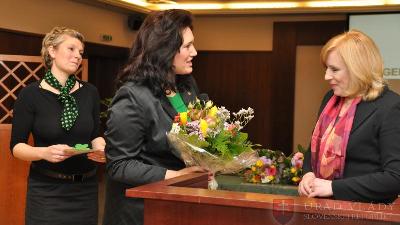 On Tuesday 15 March, Crystal Marie Pavelcik, President of the (IWCB) International Women’s Club of Bratislava, convened an IWCB General Meeting in honor of it’s Honorary Members for 2011, with all honorees being presented with a Certificate of Honor and bouquet of flowers.

A one-year Certificate of Honor was granted to the following outstanding female personalities in Slovak society, whose public presence supports the aims of the club.

This year the Board of IWCB nominated and approved the following as Honorary Members:

Mrs. Silvia Gašparovičová, First Lady of the Slovak Republic, and

The Prime Minister Iveta Radicova accepted the invitation and gave an inspirational speech to the the IWCB members in attendance. A video recording of the event can be seen here (unfortunately, Gašparovičová and Dzurindová were not present due to other engagements)

Also granted Certificates of Honor were the founding IWCB Members Vilma Cipárová, Zuzana Havlíková, Eva Karvašová, Jeny Martinková, Eva Siracká, Violeta Strelková, and Dalma Špitzerová. These women have been actively involved in the Club’s life from the very beginning and contributed to its growth and change during the past 20 years.

The IWCB is a non-profit organisation and since 1991 it has focused on promoting friendship and understanding, supporting cultural activities among women of all nationalities, and to assisting financially selected charity organisations in Slovakia.

The current IWCB membership base comprises over 150 members from around 35 countries. The club actively highlights a specific country each month, with this month’s highlight being Ireland. Irish Ambassador to Slovakia, Kathryn Coll came to help inform about and celebrate the country, which was followed by a festive Irish Jig from the Avalon Dance Troop. You can get more information about the IWCB from www.iwc.sk.