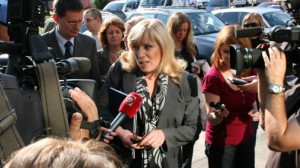 After yesterday’s coalition session, PM Iveta Radicova shot off to meet with representatives from the Trade Union Conference (KOZ), who will hold a protest march in Bratislava today.

After the meeting the PM acknowledged that the trade unions were entitled to demonstrate their discontent with the government’s austerity measures, but that these were essential and would do good in the end. In defence of the government’s plans, Radicova said that all the measures were aimed at improving the quality of life in the country.

KOZ President Miroslav Gazdik said that although they supported the consolidation of public finances, they had a different view on how to achieve it. He was confident that some adjustments would be made to mitigate the impact on ordinary people, but that there was now no way to stop the protest in Bratislava.

The protest will start at around 4pm today on the square Namestie SNP, before making its way up castle hill to parliament.