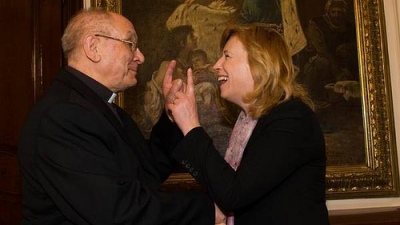 Prime Minister Iveta Radicova expressed her condolences today over the death of Bishop Rudolf Balaz, who died yesterday (27 July) from embolism aged 70. In her statement the Prime Minister praised the greatness of the man and his strong moral stance during the communist era.

During communism Balaz worked illegally as a priest, and was eventually ordained a Bishop in 1990. Later he became entangled in an affair involving the Slovak Intelligence Service (SIS), when they allegedly tried to frame the Diocese of Banska Bystrica and Bishop Balaz with accusations that they were trying to sell off a valuable painting – Adoration of the Magi. The investigation eventually pointed the finger at the SIS and its head Ivan Lexa, but nothing was ever proven.

An apology was only given to Balaz when Mikulas Dzurinda took over from Vladimir Meciar as Prime Minister.

Statement of Prime Minister Iveta Radicova:
“As Prime Minister of the Slovak Republic, I would like to express deep sorrow over the sudden death of Bishop Rudolf Baláž, who was a distinguished figure of Slovak social and spiritual life. The greatness of the person and the strong moral qualities he possessed were proven under the communist regime, when for a period of time the regime forbade him from acting as a priest, and also during Mečiarism, when as bishop he stood up in defence of the principles of freedom and democracy, for which he was openly belittled by the executive. His life story is a testimony of courage and fortitude, and was a message to the whole of society that freedom and democracy, truth and justice, are values worth fighting for, that must be defended and which every power must respect. My personal meetings with Bishop Rudolf Baláž were always in the spirit of respect and open dialogue and I will always remember him as testimony to a true personality”; translation of statement of Prime Minister Iveta Radičová.