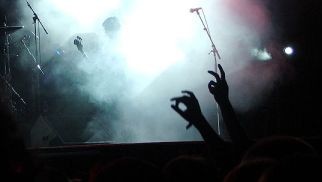 The first year of Pohoda Indoor Camping Festival will take place on 25-26 November 2011 in Expo Center Trenčín premises. The program will be taking place on four stages; this festival has one peculiarity: it will be possible to camp directly in heated exhibition halls. Festival-goers will be provided with room for pitching their own tents; Tent Hotel Kempingski will also be on offer.

“We’ve played with the idea of transmitting the charm of the summer Bažant Pohoda to its fall edition; with the idea of organizing a 100% festival – including the possibility of spending more days together and creating festival community – for a few years. For this reason we’re offering “indoor” camping. We haven’t seen this anywhere in the world. We’re so excited about how our festival-goers will take this idea,” says Pohoda Agency director Michal Kaščák.

Festival program is based on its summer version; it’ll be a mix of music, theater, film, literature and debates. Festival-goers can look forward to the energetic Hadouken!, crazy New Young Pony Club, pleasantly dark Esben and the Witch, jazz-experimental Polar Bear as well as to a former Zero 7 vocalist Sophie Barker, who is getting more and more successful at her solo career. A crazy French-American quartet Paris Suit Yourself, shock Australian-AmericanThe Death Set, Finnish hoydens Pintandwefall, Polish perennial stars of world music Krokeand Ukrainian duo Zapaska will come to play as well.

The local scene will be represented by young bands such as Got Blue Balls, Gwerkova,Talkshow, Jelly Belly and Dynamo Team. The legendary Le Payaco will be playing another exceptional concert of theirs. Marián Varga and Noneto – a union of music magician with Moyzes Quartet and wind quintet – have prepared a world premiere of a new project for us. afterPhurikane concert will be a music delight; B-Complex will show us world-class drum and bass, whereas Bene and Roland Kánik with their project Spam Poetry will present high-quality hip-hop. Well-established brands such as Puding pani Elvisovej, Longital and Sto múch will come to play as well.

The representation of Czech artists will be interesting. Czech legends Půlnoc and Mňága a Žďorp will remind us of times before November 1989. Mikoláš Chadima and his MCH Bandwill play their world premiere of the project Tagesnottizen featuring Diane Krausse. Apart from these “dinosaurs” new Czech talents Dva, Fiordmoss, Luno and the fascinating WWWwill be performing as well.

Other bits and pieces will be added to the program jigsaw puzzle – and not only of music character: there will also be theater performances, literature, discussions, film screenings and dance workshops. The premiere of Zuzana Piussi film Muži novembra (Men of November) as well as a debate with Fedor Gál will belong among the highlights of the event.

The festival capacity will be limited to 2,500 festival-goers. Camping area will be limited as well – its capacity is 240 three-person tents. Only self-supporting tents that do not require ground stakes and have a maximum size of 2.5 x 2.5 m will be allowed. “We need to take the capacity of the premises into consideration, but we’re sure that expo center in Trenčín is an ideal place for this kind of events. People will find all the stages, camp, neatly-arranged food stalls as well as parking lot at one single place. I am also looking forward to my favorite theme park attractions,” says the head of production Katarína Kintlerová.

The festival is a loose sequel to the three editions of the “Concert for the Aware”, which used to take place on 17 November in Bratislava’s PKO. The change of location has made it possible to extend the event to two days and to make it more open. The first reactions are promising. “We received positive reactions from the bands representatives only, so the artists confirmed easily. We’re glad that the audience will see several foreign performers at this new festival. A few agents will come just out of curiosity,” says Jana Polnischová from the organizing team.

Tickets are available in the festival official online shop on shop.pohodafestival.sk and via Ticketportal. The first 17 tickets purchased via online Pohoda Shop will be priced at 11€, another batch of 111 tickets will be priced at 29€ and then the tickets will sell at 35€. Gate price will be 45€. Children 12 and under can enter the festival for free.

Camping will be priced at 3€/a tent in the presale and at 10€/a tent at the venue. The same holds for car park passes. Tent Hotel Kempingski will be priced individually. “Car park pass and camping prices are set to the minimum – what we need to watch are expo center’s limits and we also need to guarantee room for those interested,” explains Veronika Vrabcová from Pohoda Agency.