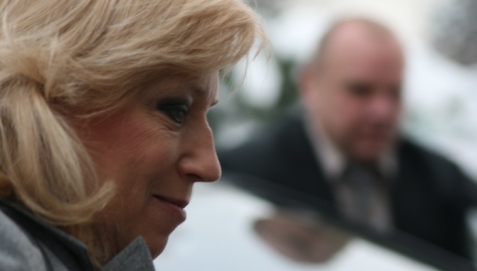 The rapid reshuffling of powers and affiliations in Slovak parliament is seeing the SaS (Freedom and Solidarity) party being shunned by its coalition partners for defying to vote for the EFSF, and they would prefer to see the SaS party just pack up and leave.

Immediately after watching her government collapse, Prime Minister Iveta Radicova called on SaS head Richard Sulik and the party’s ministers to stand down, something they see no reasons to do merely for refusing to be “blackmailed” into changing their stance to the EFSF. Radicova herself is set to hand her resignation to President Gasparovic tomorrow after he returns from Asia.

Head of the SaS Richard Sulik and his ministers will most likely be recalled in today’s parliamentary session anyway, as Smer-SD reaps further benefits from the new cloud that hangs over the relationship between the SaS and the other coalition partners.

The pro-EFSF coalition partners have already rather stubbornly dismissed the long-planned tax and levies reform prepared by labour minister from SaS, Jozef Mihal, which is crucially intertwined with the budget, so all sorts of complications are in play now.

Before entering the session, Sulik told Pluska.sk that he had “done nothing wrong or broken any agreements. All we did was not let ourselves be blackmailed. I won’t stand down because of that, but I also won’t hold on here tooth and nail”. “Our only sin is that we didn’t change our opinion” he added.

The coalition SDKU, KDH and Most-Hid parties have now aligned with opposition party Smer-SD of Robert Fico to push through the EFSF bill in exchange for early elections in March 2012, till which time the interim government approved by President Ivan Gasparovic will act more or less as a symbolic caretaker.

The starting gun has already cracked for the elections in March as well, just enough time for Robert Fico’s Smer-SD party to work on its already massive popularity from the safety of the opposition bench, while not maybe enough time for all the other fractions in the Slovak parliament to reshuffle and pose a threat to him.

Slovakia could even be heading towards a one-party government if things go right for Fico’s Smer-SD, which they have this week, and also because recent events are starting to manifest in apathy and disgust among those who voted in the Radicova coalition.