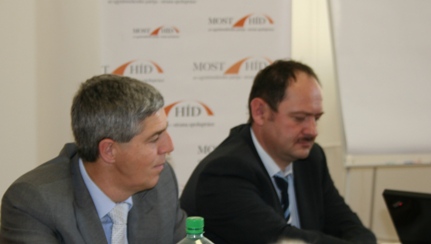 Election polls can often be dismissed as not reflecting reality, because although being carried out on a cross-section of the population, the actual number of respondents can produce large fluctuations in the levels of support attributed to individual parties.

Nevertheless, the most recent poll conducted by the agency Median SK on just over 1,100 respondents shows that the strongest political party Smer-SD lost some support from the 45% registered in June to 42.7% in July. The Most-Hid party of Bela Bugar had its ego boosted, though, with the poll claiming a hike in support from 4.9% to an impressive 8.6% over the same period.

If the figures are right, Most-Hid now enjoys more support than its coalition partner SaS, which the survey attributes just 8.2% now. The other coalition parties SDKU and KDH got 16.6% and 9.8% respectively. The nationalist SNS party would now enjoy 6.5% of the vote, an improvement over its actual elections results from June 2010, when it just passed the 5% threshold by a whisker.

The former parliamentary parties SMK and HZDS would still not get back into parliament according to the poll, as they would receive just 2.5% and 2.2%, respectively. Two thirds of those asked said they would take part in an election, while one third remained apathetic to it.