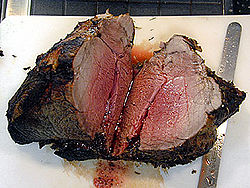 The latest food scandal to hit Slovakia involving dyed pork being sold off as beef from Hungary has caused additional concern as the red dye being used to disguise the pork is of an unknown synthetic origin.

Several companies in Slovakia came forward with stocks of the dodgy meat after the scam was disclosed, and the Slovak authorities can still not say whether the meat is hazardous to health or not.

The scam was discovered after Slovak company Hermes Classic sent samples of the meat it had bought to the State Food and Veterinary Authority after a pool of red water appeared when the meat was defrosted. Unfortunately for the company, it had purchased over 420 kg of the prohibited meat.

The Slovak company that has been importing and selling the fake beef doesn’t officially exist and has all but vanished into thin air. The company premises are empty, the gates locked and it was never even formally registered, so finding the culprits might prove difficult.

There is no way of knowing how much of the coloured pork has made it onto the plates of unsuspecting diners in restaurants, and there are concerns that anyone with stocks of the meat will still try to pass it onto consumers to avoid financial losses.

The Hungarian scam meat from a scam company is yet another case of hazardous food products making it onto the Slovak market from its neighbours with no regard for human health. Most recently, other cases include motorway salt being used in food products and thousands of non-refrigerated salmonella-carrying eggs (from Poland), blue cheese containing listeria and the deadly case of methanol in alcohol from the Czech Republic, which left 29 people dead and led to a nationwide ban on sales of alcohol over 40%.