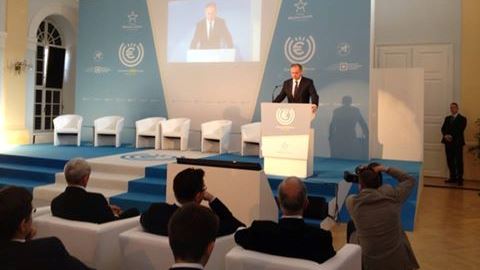 The Economic Ideas Forum (EIF), one of the biggest economic events in Slovakia this year, finished its first day with great success. The Forum, organised by the Wilfried Martens Centre for European Studies, was opened by Slovakian President Andrej Kiska. It was hosted by former Prime Minister of Slovakia Mikuláš Dzurinda. ‘It is fitting for Bratislava to host this important European economic forum because Slovakia can play a positive role in finding answers to Europe’s economic challenges’, President Kiska said.

Today the EIF focused on the growing economies in Central and Eastern Europe, closing the gaps of the digital single market and the transatlantic trade agreement.
‘The main reason for the economic growth of Slovakia has been decreasing economic regulation’, said Ivan Mikloš, Member of the Slovak Parliament and former Minister of Finance. He also stressed that EU member states should introduce entrepreneurship courses into their education systems in order to promote innovation amongst young people.
The day concluded with a debate about the Transatlantic Trade and Investment Partnership agreement (TTIP). Anthony Luzzatto Gardner, US Ambassador to the European Union, said: ‘There is a lot of fear and mistrust among Europeans about the TTIP, which is not the case among Americans. Overall knowledge about TTIP is very low and EU governments need to better inform their citizens.’ He also stressed the uniqueness of the agreement: ‘The TTIP is an opportunity for the US and the EU to create the rules governing world trade.’
The EIF will continue tomorrow with speakers such as Valdis Dombrovskis, Commissioner-Designate for the Euro and Social Dialogue; Mikuláš Dzurinda former Prime Minister of Slovakia and President of the Martens Centre; and Pedro Mota Soares, Portuguese Minister of Solidarity, Employment and Social Security. The conference can also be followed live on www.martenscentre.eu.
About the Economic Ideas Forum
The Economic Ideas Forum (EIF) is an annual high-level conference organised by the Wilfried Martens Centre for European Studies in Brussels. It brings together economic experts, high level policy makers and business representatives in order to discuss new economic solutions for issues of European and global importance.
This year’s Forum, titled “Innovation and Reform: Setting the Growth Agenda”, aims to foster Europe’s return to economic growth. Through its seven panels, it brings the attention to four principles: reform, innovation, social justice and investment. A renewed commitment to these principles, along with more innovation and entrepreneurship, is the recipe of the centre-right to create jobs and a long-term growth of the economy. The Forum takes place in the Historical Building of the National Council in Bratislava.
About the Martens Centre
The Wilfried Martens Centre for European Studies was established in 2007 as the political foundation and official think tank of the European People’s Party (EPP). The Martens Centre has four main goals: advancing centre-right thought, contributing to the formulation of EU and national policies, serving as a framework for national political foundations and academics and stimulating public debate about the EU. It promotes a pan-European mind-set based on centre-right, Christian Democrat, conservative and like-minded political values.