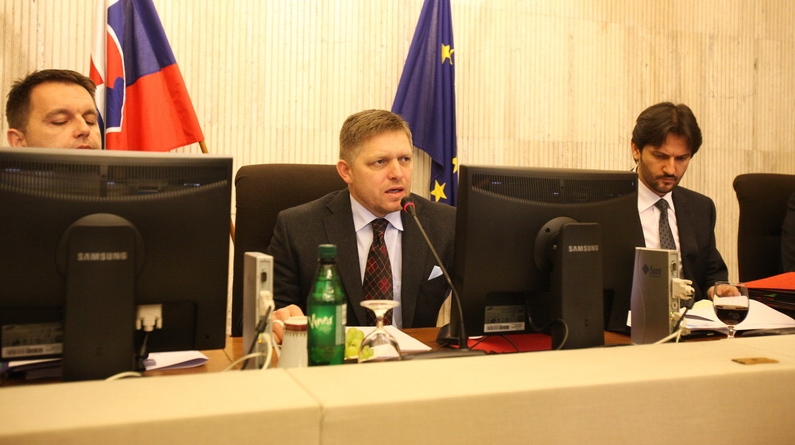 Prime Minister Robert Fico is facing his first no-confidence vote in parliament over the affair surrounding gas utility Slovensky plynarensky priemysel, where he is accused of being in cahoots with financial group J&T, which allegedly showed up as the co-creator of the contract concluded with the Ministry of Interior.

The no-confidence motion sees the opposition parties come together in unison, thanks to revelations that point to the financial group taking part in the formation of the contract with the government.

As seems to be the rule, the special parliamentary session from yesterday turned into a bit of a fiasco, with Fico calling on his Smer-SD MPs to leave the house until the vote so as not to listen to the insults. This led to jeers also from protesting citizens screaming from the balcony about the level of cronyism in the country, demanding that the thievery stop.

The move met with a response from the opposition, with OLaNO head Igor Matovic deciding to filibuster the floor, with readings all night, presenting the facts surrounding the SPP affair. The session went on until 7 a.m. this morning, and will reconvene at 7pm this evening, as the regular session is now on the agenda. A shapely cardboard cutout of PM Fico accompanied the proceedings, and even led to a scuffle or two.

Although the sale of a 49% stake in the parent company SPP was between the former foreign owners Gaz de France -Suez and E-ON Ruhrgas and the new owner EPH, at least on paper, the details of the complicated tripartite transaction hint at some backstage agreement between the government and EPH, comprising two influential Czech businessmen and Slovak financial giant J&T.

The opposition can blurt out cries of cronyism as much as it wants, but thanks to PM Fico’s Smer-SD party having a majority in parliament, the theatrical show will end with his obedient back-benchers staving off the motion.

PM Fico himself claims that his government, which declared outright that it would halt privatisation of strategic state assets, proceeded in way so as to curb gas prices for ‘Slovak citizens’. Mr Fico’s claim is a bold one, essentially having a say over world gas and oil markets, but in the end the new private shareholders snapped up the lucrative parts of the company in the shape of the subsidiaries Eustream and SPP-Distribucia.