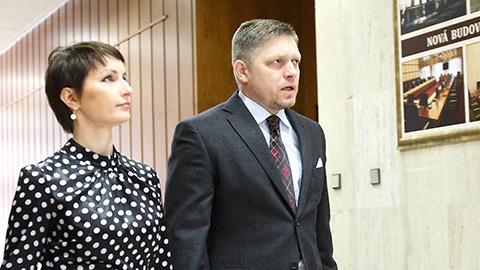 The race is on for the presidential elections set for 15 March this year, with a total of fifteen candidates hoping to gain the support of the almost complacent public, the highest number of candidates to date.

The number one favourite is current Prime Minister Robert Fico, who tactfully announced his candidacy in December almost simultaneously with the announcement of the election date . Fico is assured a good percentage of the vote, but could still lose in the second round set for 29 March, provided all the ‘lost’ votes rally together.

Other candidates include self-made millionaire and founder of the Good Angel charity, Andrej Kiska, who this week called on PM Fico to disclose the details of the police investigation surrounding the Interblue scandal with emission quotas.

Many are believed to have profited from the underpriced sale of emission quotas via a garage-based company, which then sold them on at a higher price for profit. Fico said he had no problem with the details being disclosed, but interior minister Robert Kalinak is refusing.

Kiska is tipped as one of the strongest potential rivals to Fico, provided the elections go to a second round, but other contenders include Pavol Hrusovsky (Christian democratic KDH party), who also enjoys support from another two opposition parties, SDKU-DS and Most-Hid.