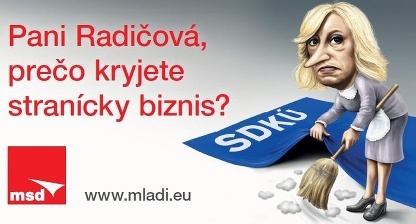 As the whole issue of crony relations between businesses and politicians grabbed media attention following the release of the Gorilla transcripts, Radicova said these kinds of relations should be defined by law. She noted how businesses do their utmost to get on good terms with politicians so they can sway their decisions.

Radicova said “getting corruption, which is ingrained under our skin, out of our mentality, out of politics and basic institutions, often seems like a Don Quixote battle”. She said this was partly because of the close ties between business people and politicians that develop in such a small country.

Talking on the Gorilla affair, which saw the leak of secret service information pointing to cronyism and parallel financing in political parties, Radicova feels that it will never be fully investigated, like many other sensitive cases in Slovakia. She believes that the actual recordings that are mentioned in the texts have long been destroyed, while quietly hoping that the Attorney General’s Office will handle the case properly. “It’s now or never” she concluded.

The Gorilla case was already investigated by the police 5 years ago, but the case was closed with the conclusion that the texts were not authentic. The texts are highly incriminating of various top politicians and public figures, so few expect any real repercussions to be incurred from it. The newer parties are obviously pushing for justice to be done, with the liberal SaS party putting together signatures for a special parliamentary session on the affair.

After her government collapsed in October, Radicova announced publicly that she would be leaving politics, but now the itch has returned. She now does not rule out the possibility as she had promised the late Vaclav Havel that she would not back off from public political life altogether.