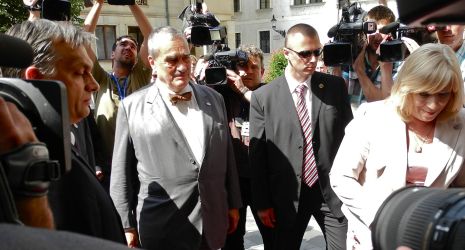 At the Visegrad 4 summit in Bratislava yesterday, Prime Minister Iveta Radicova took the chance to send a clear message to Budapest via Hungarian PM Viktor Orban.

Radicova spoke to Orban regarding recent statements by Hungarian parliamentary chairman Laszlo Kover, who acknowledged the possibility of a military attack on Slovakia in an interview for Czech daily Hospodarske Noviny. She told Orban that she condemned outright the comments made by Kover, and that such comments should never be uttered again.

Kover had questioned the Slovak-Hungarian border following the construction of Gabcikovo dam, saying that the “brutal” violation of the border would entitle Hungary to launch a military attack. Radicova said his statements were not only insulting, but also posed a serious obstacle to good neighbourly relations.

Hungarian PM Viktor Orban gave PM Radicova his assurance that his government would do everything in its power to cultivate friendly neighbourly relations. Some might ask Mr. Orban; “Why the sudden change of heart?”.