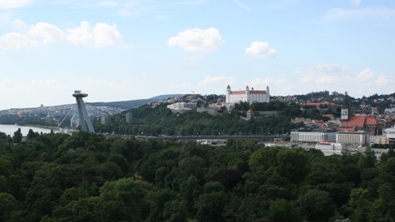 It is one of the biggest gaming trends these days, and it’s one of the biggest gaming events that is taking place in Bratislava: On May 30th and 31st, 2015, together with Bratislava Cultural and Information Center, Google Niantic Labs invite players of their Augmented Reality game Ingress to Bratislava, to take part in a major battle and two-day event, called XM Anomaly Persepolis, as well as a special Mission Day.

Ingress uses the whole world as a battlefield: Two factions are fighting over so called portals. These portals are real, existing locations – such as prominent buildings and landmarks, statues or pieces of art.

Anomaly events are taking place all over the globe, always in different cities, and are the highlights for Ingress players. Depending on which faction wins the most portals – and as such the Anomaly event – players do influence the game’s story development.

For the first time, such an event is now taking place in Slovakia. So far, 1,400 players already confirmed their participation in Bratislava, making it the biggest gaming event to happen in town yet.

We cordially invite you to take part in the event – as a member of the press, please register with us, also to get interviews etc arranged: niantic@marchsreiter.com – phone: +49 (0)89 51919942.

Participating in the event is free, players can register using the following link:

Mission Day in cooperation with Bratislava Cultural and Information Center

Niantic Labs
Niantic Labs is a startup within Google dedicated to creating mobile apps that connect people with the real world.
Founded by John Hanke, who previously helmed the Google Geo team (including Maps and Earth), Niantic is
focused on creating applications that inspire real world adventure, exploration, and social interaction. Niantic Labs
has launched two products, Field Trip and Ingress, and is currently developing its next interactive entertainment
experience, Endgame.
Ingress
Ingress represents a unique, pioneering entertainment experience known as ‘Real World Games’, an all-new style
of game featuring innovative massive multiplayer mobile gameplay which transforms neighborhoods and cities
around the world into an interactive experience filled with mystery, intrigue, and adventure. Using Google Maps
technology, players move through and explore the world around them, visiting historical sites, parks, and public
artworks to discover hidden ‘Portals’ leaking a mysterious energy into our dimension.
The evolving story of Ingress pivots based on the actions of the players in the two Factions, the ‘Enlightened’ and
the ‘Resistance’, who are engaged in a struggle for global control and the fate of humanity. Ingress is currently
available on Android devices in the Google Play Store and on iPhone and iPad in the App Store. Ingress has already
seen more than 10 million player activations around the world and is played across more than a 100 countries
globally.