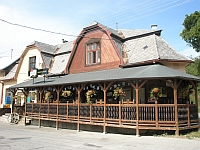 On the road from Myjava to Nové Mesto nad Váhom you turn left at Bzince Pod Javinou and continue to Cetuna. There you will find  a quaint small bar restaurant called The Country and Western Saloon.

Last Saturday whilst out on my wee bike, honoring my promise of a ride and a spot of lunch to “She who likes to be obeyed” in exchange for flat tidying services rendered, we stopped in Brezová pod bradlom at a rustic pizza place, ehm..bar, whatever, situated opposite the old train station by a bubbling brook, but waiting for service from the waitress for 15 minutes, even though she passed our table no less than 6 times without even the offer of a menu, took its toll and the bubbling brook had turned into my patience boiling.

I thus decided to get the hell out of Dodge and headed for a small place some fellow bikers from Senica had introduced me to last summer, and which I have visited many times since.

The Country and Western Saloon as it is known ( http://www.salooncetuna.sk/) offers a varied and great value menu, not the cheapest, but great value nonetheless. I have tried 2 of the steaks on offer in the past and they equal any I have had in the top establishments of Bratislava and at ½ the price and less.

On Saturday I did not fancy a steak or any heavy meaty meal, unusual for me I must say. The Kangaroo steak almost had me, though, but when the “lady ballast” heard this I saw her eyes well up at the mention of Skippy on a Skillet, so I let her order for both of us.

Before long we had fried bloody cheese with hranolky and salad, and of course the mandatory Tatarská  O“F’ing”máčka aka Tartar sauce. I bit my tongue, but for once I have to say I enjoyed this simple dish.

The cheese was substantial, the breadcrumb coating was crisp and light, loads of ham in the middle and some pretty tasty homemade tartar sauce on the side, with a very light and crisp side salad with only a hint of finely sliced cucumber. We did not bother with desserts as we were stuffed after the cheese. Just Mineral water and coffees – by the way they do a great Tiramisu.

The service was quick and pleasant as we sat on the veranda and watched the numerous vehicles and cowboys and girls ride by. Then two Vintage Jawas pulled up, one in old police livery. After dismounting, the riders inspected my Irish registered inter continental ballistic space scooter as it was once referred to and I admired their pristine vintage conveyances.

They seated themselves next to us and engaged straight away in conversation and continued to do so as their two steaks arrived. Gazing over the two steaks ordered by the bikers beside us, one a T. Bone and the other a Diablo, I commented to the two lads how I would be returning next week at the same time to gorge myself in dead cow or Roo.

Their response was that they would most likely also be there with their other bikes as it’s a regular haunt for them as well as many other bikers and their non biker friends.  So next Saturday Skippy beware, Flannery’s on the tear.