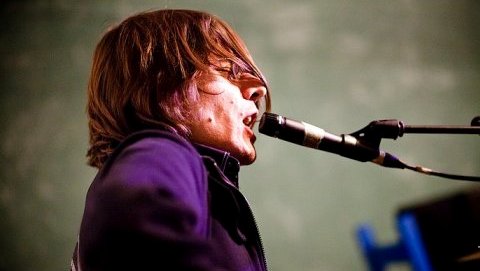 The duo landed in Bratislava on 2 November 2011 to put on what would be a great show. Jonathan, or Fernant, describes himself as a bearded, bluesy singer/songwriter and Tim, who has been listening to Dylan since childhood, has found much of his inspiration through his own personal battle with an illness in recent years.

The concert at Goblins Pub was exactly what the doctor ordered – some pure, uplifting, energetic and heart-felt music from two extremely talented musicians. Jonathan’s clear and radiant voice easily filled the pub and the spirits of the large crowd of around 100 music lovers, while Tim’s bluegrass melodies got them up dancing.

Local Dušan Kollar said he knew the concert would be fun already from the sound check. It wasn’t long before people were dancing to Tiny Legs Tim’s fast and upbeat blues, which carried a unique style with a combination of guitar, cymbal, drum pad and harmonica, in a great display of a one-man band.

Another satisfied customer Ivana Kollarová said that with the first tunes “all was forgotten in the cozy atmosphere – sipping on a hot drink and dreaming while listening to Belgian blues.” She noted how “people were smiling in satisfaction, toasting each other, dancing unreservedly and applauding the deserving musicians.”

The happy audience with tapping feet and bobbing heads were clearly engaged with the cheerful mood created by the two Belgians. Augusto Sala, a Brazilian currently living in Bratislava, said time just flew by as he spent it dancing on his stool to the rhythm of the music. “Great music, good vibes and a sexy beard all made for a very entertaining concert. Well worth experiencing,” said Augusto.

‘Goblins’ is a new pub at Dunajska 29 in Bratislava that from the very start has become the local for many foreigners and Slovaks alike thanks to its intimate and friendly atmosphere and staff.  It is centrally located and well equipped with a good sound system and small stage nicely placed for concerts.

Goblin’s owner Shane gives his impression: “I was contacted a few months before about their 4-week European tour and realised the great opportunity to bring to Bratislava something different in the form of a Belgian blues duo. The music really suited the venue and having the live band on stage was so natural that it seemed always to be there. For the first live band it brought a new twist to our every growing pub. The concert went on for 2.5 hours before the municipal police decided to join, but unfortunately to end the show”. “We want to create a mixed continental pub feel built 100% on service to this great city” he added.

With all the positive feedback from the concert, Shane and Juraj plan to start a new trend of bringing in more touring acts and local musicians to liven up the music scene in Bratislava. The bar is already host to all kinds of special evenings, with quiz nights, comedy, music and sports screenings all on the agenda.

The following day the Belgian musicians volunteered their time to play a special private concert for the appreciative students and staff of the CS Lewis Bilingual High School in Petržalka. The students, especially those with a musical background, were just as excited as the audience had been the night before. A breath of fresh air for all who were fortunate enough to enjoy this innovative duo (watch video).

Fernant Zeste & Tiny Legs Tim are currently halfway through a 25-day tour throughout Europe with gigs every night. You can find more information online about their tour dates and locations, CD sales, music and photos here and can view a photo gallery and video from Tuesday’s shows here.

Looking forward to the next great night of entertainment.