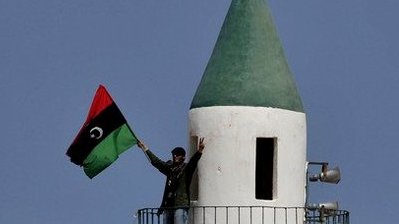 This morning at 8.30 am the Libyan Embassy in Bratislava hoisted the tricolour Libyan revolutionaries’ flag, meaning the diplomats now stand behind the National Transitional Council established by the revolutionary movement.

The same gesture has been made in tens of other countries, including the Czech Republic, Algeria and Egypt, with the flag now flying high also on the government buildings in Tripoli, as the revolutionary force advances. In the Czech Republic there are reports of diplomats burning Gaddafi portraits.