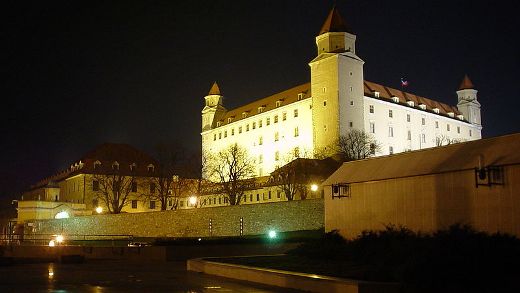 On Saturday 7 August right-wing extremists marched to the controversial Svatopluk statue in the courtyard of Bratislava Castle. They got a surprise when they arrived, though, as they were refused entry to the castle grounds by riot police and special police units.

They were refused entry because the event had not met the condition of being announced officially beforehand. At the same time, another rally was taking place in the courtyard, where civil activists were protesting against what they referred to as neo-Nazi lies, violence and propaganda.

As the extremists refused to disperse and leave the area, the police intervened, apprehending and arresting several of the demonstrators, including ‘former’ leader of extremist organisation Slovenska Pospolitost, Marian Kotleba. There were a number of skirmishes and some blood, with the extremists demanding that the police free Kotleba and the others.

The castle grounds had to be closed because of the incident, much to the confusion and disappointment of tourists, as Bratidslava Castle is one of the most visited landmarks in the country.