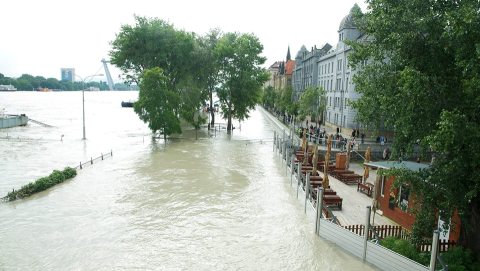 Update: The water level reached 10.20 metres on Thursday morning (a new record since records began), so the final level will be higher than anticipated yesterday. The section of road between the ‘old’ and ‘new’ bridges is also now closed. Stary Most bridge is now also closed.

Update (0830): The water level rose 4cm in less than half an hour, now at 10.24 M. Several families had to be evacuated from Devinska road.

Slovakia’s capital Bratislava is still facing the threat of problems as the River Danube continues to rise, having burst its banks and swelling to 9.87 metres today.

According to forecasts, the river should reach its peak just over 10 metres sometime tomorrow afternoon or early evening, so there is still the possibility of more damages, with many threatened families on standby to be evacuated, even though the river is not expected to overcome the flood barriers.

A state of emergency was declared yesterday for the city, with some taking the warnings seriously, like the British Embassy, which promptly closed its doors and evacuated the building, despite no immediate threat. Residents of the Old Town are also being asked to inspect their basements for flooding, as the rising level of the ground waters could spring up anywhere.

As always when the Danube rises, the worst hit is the borough of Devin, which was fully cut off from the rest of the city, with tens of houses already caught in the floodplain. New mobile barriers that have been set up seem to be doing their job at least, holding the water at bay.

Provided no torrential rain falls in the next day or so, Bratislava looks like it will escape with minimum damages again, this time thanks more to precautionary measures, something that tended to be lacking in the past. Prime Minister Robert Fico wasted no time in reacting to the flood threat, also in terms of populist rhetoric.

Along the riverfront in Bratislava city centre, the T-com beach recreational area is basically fully submerged, while the classy shopping complex Eurovea is losing ground to the water by the minute.

A body was fished out of the river at the Gabcikovo water dam, as yet unidentified. The body could have come from anywhere along the Danube, as levels in Germany now subside.  Meanwhile, across the border to the south Hungary is bracing itself for the worst, as the waters gain in volume and speed. Our sister site www.TheDaily.HU has been providing constant extensive coverage of developments there also with photographs as Budapest starts to submerge.