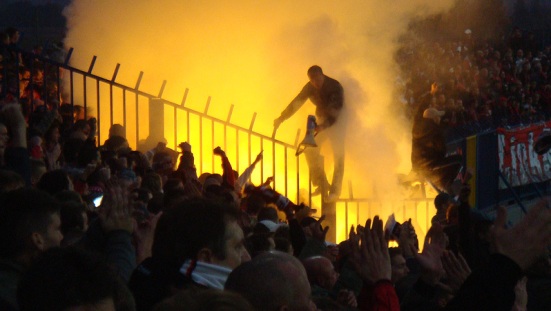 Our man Dan from BritskiBelasi takes a look at the weekend’s Corgon league results.

MSK Zilina now have a 4 point lead at the top of the Corgon Liga following their comfortable 4-0 away victory against Vion Zlate Moravce on Friday night, the hosts agreeing to move the game forward by one day to assist Zilina’s preparation for next week’s Champions League fixture in Marseille.  Zilina cruised past the newly promoted Vion team with a hatrick from striker Tomas Matjan and a goal from Zosak who played last season at Ruzomberok.  Everybody associated with the club will be hoping that both he and the team can continue their recent solid domestic form and put in a respectable display in front of the watching eyes of the rest of Europe in the South of France next Tuesday night.  The fact that Zilina now have clear daylight between themselves and the chasing pack at the top of the table probably says more about the lack in strength of depth in the Corgon Liga than anything else and reinforces the feeling that the gulf in class faced by the Slovak Champions when they enter the Champions League environment is just too wide to compete.

Spartak Trnava have stated their claim as principle challengers to Zilina by defeating 2nd place FK Senica 2-1 away from home on a night somewhat overshawdowed by unruely behaviour on the terraces.  Trnava fans regularly travel en masse, especially to nearby away games of which Senica is one, just 40km separating these 2 provincal towns.  There was an added importance to this fixture with the teams lying in 2nd and 3rd place going into this match.  It is hardly surprising that the Trnava fans were celebrating wildly, their team scored 2 goals in the last 2 minutes of the match to secure a dramatic victory and one which leaves the 2 teams level in 2nd place, rather than Senica opening up a gap of 6 points over their rivals.  The Trnava fans are known for thei over-enthusiastic support which unfortunately escalates into unacceptable behaviour on occasiona like this.  The Senica organisers and police were not at all happy with what happened, but the Trnava players have reacted by publicly defending the fans and the great atmosphere they generate.  So, while Trnava celebrate and will now aim to become more consistent on the field and sustain their challenge of Zilina, it is the Champions who will also be very happy to see themselves having opened up a 4 point gap.  One fears that Zilina might start running away with the title now as nobody else seems capable of sustaining a consistent challenge.

Slovan Bratislava just keep touch with the leaders after a 2-1 victory away in Kosice. Slovakia’s 2nd city team are in all kinds of trouble on and off the field and nothing less than victory would have been acceptable for Slovan here.  Goals from Martin Dobrotka and National team striker Fillip Sebo will ease the pressure on Slovan and makes next week’s home fixture against Zilina a very intriguing prospect, Slovan will be aiming to take advantage of the fact that Zilina have a demanding trip to Marseille to negotiate first.

The games between DAC Dunajska Streda and Dukla Banska Bystrica, Tatran Presov and MFK Ruzomberok and MFK Dubnica and FC Nitra all somewhat unsurprisingly ended in draws.  The 3 relegation candidates DAC, Tatran & Dubnica will all be relieved to gain a point over Kosice who now move bottom of the table on goal difference below Tatran, both teams have just 6 points from 12 matches.

As usual this weekend attendances in the Corgon Liga were slightly disappointing, the matches at Kosice, Dubnica and Presov only attracting just over 1000 spectators.  However credit to FK Senica and especially DAC Dunajsaka Streda, both of their matches attracted over 4000 fans.  DAC are showing signs of improvement after a worrying start to the season and playing their previous match behind closed doors having not met the deadline for installation of security cameras inside the stadium.  Next week’s Slovan v Zilina fixture is the pick of the bunch and it will be interesting to see what kind of crowd turns up at Pasienky for that match.  Yet more interesting will be to see how Slovan approach this match on the field because you would think that if they lose here their title challenge is all but over already before the winter break, very worring for a club who have recently announced their 6th coach since their 2009 title win.