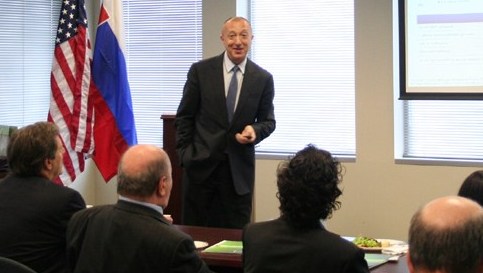 Slovak Agency for Investment and Trade Development (SARIO) organized a trip to the USA to present Slovakia as an investment destination. Its representatives visited Silicon Valley and Dallas. In Silicon Valley they attended the opening of the Slovak pavilion, where also the winners of the Slovak Start Up Development Program are stationed. SARIO representatives viewed innovative pavilions of other countries that use the different models to support research and development.

“I am proud that Slovakia is ranked among countries like Austria, Denmark, Finland and Singapore, which send representatives to America to train, learn and then move forward and implement their innovative projects at international forums” R. Šimončič SARIO CEO said.

Important destination during the U.S. trip was Dallas, the financial and economic center of Texas. SARIO, in cooperation with the Embassy of the SR in Washington as well as the Honorary Consulate of the SR in Texas, organized there an investment seminar. The aim of the seminar was to introduce Slovak business environment through the success stories of well established companies such as Dell and AT & T.

“We were able to follow up on a successful investment roadshow from a year ago and re-establish interesting contacts with American companies. They were interested mainly in skilled workers in Slovakia and the operation of shared services centers, “Andrea Gulová, SARIO CEO Deputy and Director of the FDI Section said.

United States have great potential for investment in Slovakia. Investment projects applicants from the USA for the first time overtook potential European investors. SARIO is currently in progress on 15 projects from the U.S. totaling 350 million Euros, with the potential to create 4,000 jobs.

Slovakia was represented in the U.S. by Robert Šimončič, SARIO CEO, Andrea Gulová, Deputy SARIO CEO Deputy and Director of the FDI Section, as well as project managers of SARIO.