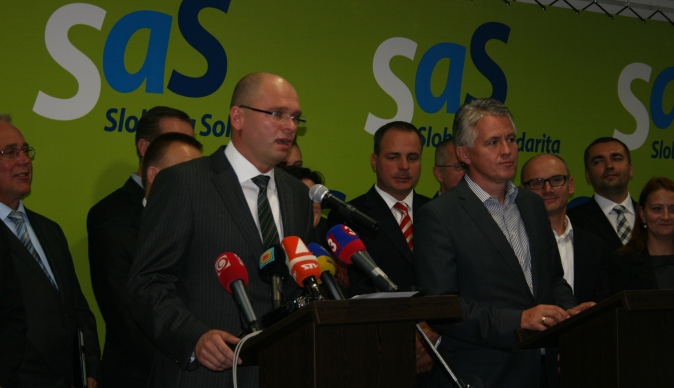 Nobody could have foretold just how much internal turmoil would be caused in Slovakia by the latest proposals for the EU’s EFSF and the ESM bailout mechanisms, but the staunch opposing stand of the liberal SaS party has been rocking the boat, which is now starting to sink slowly into murky waters.

SaS party head Richard Sulik rallied his troops today at a press conference attended by all 18 SaS MPs in a full show of support for the party’s opposition to increasing Slovakia’s contribution to the EFSF. Sulik’s statements had an air of disgust about them, especially concerning how his coalition partners are trying to merge a vote on the EFSF with a confidence vote in the government, which could be regarded merely as an attack on Prime Minister Iveta Radicova.

Sulik said the proposal to merge the two issues was like his coalition partners getting out the “heavy ammunition”. He also criticised his partners for opening the door to the big bad wolf, opposition head Robert Fico, and for creating the possibility of Slovakia slipping back into the “dark ages” of 2006-2010 when Fico’s government held power.

The idea of placing no-confidence chips on the table is starting to gain increasing support in the coalition from the likes of finance minister Ivan Miklos, head of Most-Hid Bela Bugar and some KDH MPs. This can be seen as a way of trying to blackmail the SaS party into backing down from its position, or as a way of ousting Iveta Radicova from her post as PM.

In this respect, Sulik said that if “our partners don’t want to govern with the SaS, then so be it, but what alternative are they offering to the people?”, adding that a year ago they had been resolved not to let Robert Fico back in power, but that now they were opening the door to him. He then accused Fico’s government for causing huge damages to Slovakia over its four years in power.

Sulik made it clear that the SaS party would never support the irresponsible policies of certain countries and that his party was not prepared to sacrifice the people of Slovakia. “We will never support a decision that would endanger the stability of the Slovak economy”, he said.

Sulik and his 18-strong entourage will vote against the EFSF proposal in parliament in a few weeks, and they are fully aware of the economic consequences of such a step, he said, adding that it would not be a “painless” affair.

Head of the SaS party caucus Jozef Kollar questioned the actions of Robert Fico’s Smer-SD party, because Smer should vote in favour of the proposal if it supports what it called “such a principal matter”. This does not look set to happen, though, as Fico has made it clear that his party would not vote in favour unless the government were united on the issue. Kollar said this was just a “cowardly alibi” as a way of attacking PM Radicova.

Nevertheless, Sulikmade it clear that his party would not stand in the way should the coalition partners agree with Fico’s Smer-SD to get their way. This would not fit into Fico’s plan, though, and he would gain very little tactical ground from it, except possibly some backstage agreements.

“We (SaS) will vote according to our consciences” said Sulik, and that collective conscience is telling them to say a clear Nay in the vote. He also made it clear that if the coalition partners started to put more pressure on them, they would readily step out of the coalition.

Slovakia was a thorn in the first loan to Greece, being the only country to refuse it, but this saved Slovakia around EUR 800 million, according to Sulik. Now the so-called ‘little big country’ is back in the spotlight, as it will be the last to vote on the issue, but as Sulik concluded “sometimes little countries do big things”.