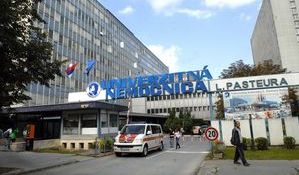 The undercover police officer who was shot while pretending to be the future Swiss victim of alleged cannibal Matej Curko has finally been released from hospital after three weeks, reports TASR newswire.

The officer was shot on 10 May in the village of Kysak as part of the sting operation to catch the flesh-hungry Curko, who himself took five bullets to the head and body from police marksmen, dying in hospital two later.

The 37-yr old police officer was under constant monitoring at the Louis Pasteur Hospital in Kosice for 20 days before being released yesterday. He had a lucky escape as he had been shot through the arm with the bullet entering his chest cavity. The police report states that it was a bullet from Curko’s gun that shot the policeman.

The subsequent police investigation led to the discovery of the mutilated bodies of two young woman who allegedly volunteered to be killed and eaten, just like the Swiss man who backed out at the last minute, with the shot police officer taking his place.