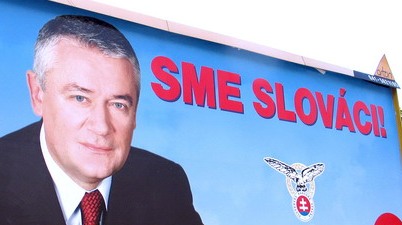 On his visit to Slovakia today, Hungarian President Pal Schmitt spoke frankly about his position regarding dual citizenship for ethnic Hungarians abroad.

The issue has been at the centre of disputes between the two countries for almost a year, but the president says he would support people in getting dual citizenship.

President Gasparovic, on the other hand, says Hungary should never have introduced the law, and that we should be bringing up the young generation without holding old grudges from history.

The Hungarian president was supposed to meet the heads of MP caucuses, but the journalists waiting for their arrival were confronted only by national party SNS chairman Jan Slota, who announced the change of the president’s plans.

Instead of the planned meeting, the president, allegedly due to time constraints, opted only for a face-to-face with parliamentary chairman, Richard Sulik.

Slota said he wanted to ask the president several questions. Firstly, if Schmitt felt like the president of 15 million Hungarians or just 10 million. He said we should also ask him about his relationship to the Treaty of Trianon, or why he signed the controversial laws that the EU is also not happy about.

He went on to attack Hungarian PM Viktor Orban, who came under heavy fire also from the EU today, saying either he or the president should apologise for 200 years of genocide and suppression.